Share All sharing options for: West Virginia Expresses It's Concern 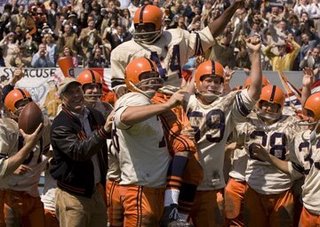 I've been pretty surprised that up until now we haven't heard a large uproar from the West Virginia or Texas communities over the scenes in The Express depicting their fans as snarling, angry racist fucktards (actual character names). Of course, with the film being released in theaters it's the perfect opportunity for Mountaineer fans and Morgantown residents to get fired up over the verbal and emotional abuse hurled by their thematic counterparts. In the film, Syracuse plays West Virginia as part of its 1959 road to a national championship. Only problem...that didn't happen:

West Virginia and Syracuse did not play in Morgantown in 1959.

Davis and the Orangemen visited Mountaineer Field only once, on Oct. 22, 1960.

"I apologize to the people West Virginia because that did not happen," Easterly said. "I don't blame people in West Virginia for being disturbed. The scene is completely fictitious."

Oops. But c'mon now, we know Hollywood likes to play with dates and times to make its point, we had to expect that. But what of your being painted as fire-breathing bigots?

"It was 48 years ago, but something that ugly -- I would have remembered that," said Evans, 71. "I don't recall anything negative happening."

The next year, he enrolled at WVU, where he played linebacker and defensive guard.

"That's just awful," he said of the scene. "I was there in the early 1960s and there was simply nothing like that happening in Morgantown, either in athletics or otherwise.

"I've been involved in West Virginia football as a player, assistant coach and administrator for 43 years and I've never seen anything like that happen."

Local TV personality John Marra intimates that West Virginia fans and locals should boycott the film. Then again, how many Morgantown folks are rushing out to see a movie about a Syracuse player anyway?