Share All sharing options for: Time Only Halfway Done Telling

Brent Axe has asked SU fans to make an important vote on the issues that really matter. Forget that Osama guy and the Crypt Keeper running for President, he's talking about your thoughts on the best and worst of the 1st half of the SU season. Mostly worst. I figured I'd help ya'll out with the correct answers:

* "The Express" Premiere at the Landmark Theater

The smart-ass answer is of course the last one, and boy did that feel good, but you gotta go with The Express Premiere. Even though the rest of the weekend was a mess and the Swooshgate turned the Ernie Davis statue into a laughing stock, at least we had that one night where Syracuse Football mattered again.

*Pretty much the whole game

*The 4th Quarter of the Pitt game

Devine's TD hurt but preventing it wouldn't have stopped the bleeding entirely. The game did suck and the 4th quarter of the Pitt game was horrible, but I'm going with the Nike logo on the Ernie Davis statue. We trusted SU Athletics to honor our greatest player with respect and class and they shit all over it, cutting corners and not double-checking. Then when the story broke, it was the perfect metaphor for the program's current state of ineptitude. It made SU look like a bunch of buffoons to the nation. Worst of all, it was extremely crass and lazy, no way to pay homage to such an honorable human being.

Brinkley has been nothing short of amazing this season, all things considered. With the rest of the backfield injured, he put the team on his back. He couldn't do it all but no one can say Curtis Brinkley isn't back or that he wasn't worth the wait.

Given the time we've had to mull them over, do any of those choices sound as sexy as they did a couple weeks ago? Well, Lloyd Carr oozes sex appeal, this is true, but I'm kinda over all of them. Tell me more about these recruiting-wizard coordinators at , and and what they bring to the table. (Oh, so I guess my answer is None of the Above)

*Gone after on October 18

*Gone after on November 1

*Gone after on November 8

If they were going to fire-fire him, it would HAVE TO be after the USF game. But I think we're past that. I fully expect the Ron Zook Plan to go into effect the week before the Cincy game. Let him finish things out and then show him the door. Like the Ron Zook plan, if we can replace him with Urban Meyer, that would be nice too. 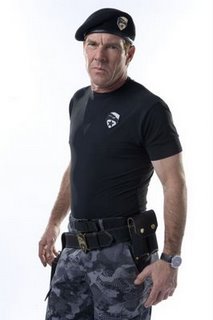 * fans take over the Carrier Dome

*Watching take over in the 4th quarter

The and Pitt things were almost expected. The attence one is pretty funny but, sadly, also understood. But anytime Dennis Quaid is involved with Syracuse Athletics, it's not only surreal but welcomed with open arms. I wish Quaid fell in love with SU after making The Express and would just start randomly showing up at other sporting events. Eventually people would starting seeing him at

Marshall Street
bars. He'd go back to frats for after-hours and pass out on people's couches. Pretty soon Nancy Cantor would have to have a meeting with Quaid and his agent asking him not to fraternize with the students, to which Dennis Quaid would respond, "Madam, Dennis Quaid does what Dennis Quaid wants, when Dennis Quaid wants."

It's unlikely, I know. But hey...time will tell.

And I whole-heartily agree with Axe, this truly is Worst Photo of a blogger/radio host appearing on ESPN: 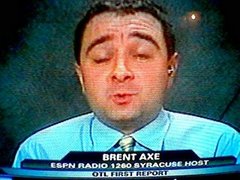