SU Basketball Player Out With A Uterus

Share All sharing options for: SU Basketball Player Out With A Uterus

Senior Cintia Johnson is preggers and so she will be forgoing her final season with the Orange to take care of more pressing matters:

Cintia Johnson, the scrappy, former starting point guard for Syracuse University's women's basketball team, will forgo her senior season. Õ7JohnsonÕ Johnson released a statement through SU that she will graduate early, in December, and then "focus on my family." She is expecting a child in January, according to SU officials.

"My experience at Syracuse was a wonderful one that prepared me for a bright future both personally and professionally," she stated. "I wish my teammates the best of luck in the future."

Johnson said she plans on pursuing a professional basketball career overseas at a later date. 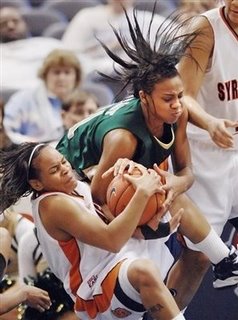 Johnson was a bench player on last year's squad, playing 13 MPG and averaging just under 1 PPG. Her loss doesn't effect the starting lineup but it does do something to SU's quickly diminishing depth chart:

Johnson's departure reduces SU's number of currently available players from 15 to 11 with the start of the season looming Nov. 14 at Siena.

Those two, Shakeya Leary, of New York City, and Lynnae Lampkins, of Upper Marlboro, Md., are expected to be on campus at the beginning of the second semester, when they will become eligible to play immediately.

Johnson, a graduate of nearby Nottingham High School, was easily one of the toughest players I've ever covered. She was a gutsy, tireless defender and a spectacular rebounder for her size (she's about 5-foot-2). And she could really handle the ball. Her size and her inability to develop a consistent outside shot limited her career -- but few athletes played as hard as Cintia Johnson.