So Close Yet Not Close At All

Share All sharing options for: So Close Yet Not Close At All 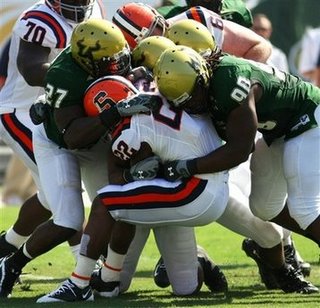 Here's a statline for you:

That would be the Syracuse offense's total output in the second half of the 45-13 asskicking the Flamerica University Bulls laid down on the Orange. What started out as a promising affair with the Orange trailing at halftime 21-13 became the Matt Grothe show in the 2nd half. The SU offense completely disappeared and the Bulls score 24 points en route to a laugher.

Curtis Brinkley, as usual, provided the only real positive to speak of. He gained 112 yards on 20 carries and included a touchdown for his efforts. Brinkley needed to be on point since Delone Carter was yet again held out of the game and fullback Tony Fiammetta was a late scratch. Antwan Bailey was once again the only Orange other than Boonah to gain yards with ten of them on three carries.

Cam Dantley was quite fech on the day. 11 of 29 for 129 yard and no touchdowns, Dantley looked shaky all game, to the point that Greg Robinson (kinda) thought about inserting Andrew Robinson at the end (we'll get to that in a little bit). Robinson has since iterated that he doesn't foresee a quarterback change but he did dance around the issue before saying that, which means he's not being completely forthcoming.

The defense looked, well, let me just give you some stats: For the Bulls it was a tale of two halves. Dave Rahme breaks down the difference:

Second half: The Bulls' defense allows nine yards and zero first downs. It is on the field 6:40 of the half's 30 minutes.

The question is, did the USF defense just improve that much for did the SU offense just run out of gas? Or did the Orange lose steam as a team? Poor conditioning, for which there is no excuse, has been an issue all season long and it reared its ugly head once again.

Or maybe USF's advantage was by cheating? Curtis Brinkley certainly seemed to think so:

"My confidence was there the whole game," Brinkley said, "but they were playing a little dirty and I was a little nicked up on the first play of the game. I took a cheap shot on my knee and it was messed up throughout the whole game.

"I'll say South Florida has a great defense, but they play dirty. I took a lot of cheap shots and unnecessary hits and stuff after plays."

Greg Robinson was asked what he thought of Brinkley's claims but he put them to bed by admitting to the world what we've known for a long time...that he has telepathic powers...

"I didn't sense that," he said. "I sensed that it was a fairly clean performance."

I wonder if he senses that we all think he's full of shit.

As I said earlier, Robinson was planning on inserting Andrew Robinson into the game in the 4th quarter. The reason he didn't? Well, shucks, he just plain forgot.

"You know. I wanted to do it later in the game, the last series or two," Greg Robinson said. "What happened was, I'm coaching over on the (defensive) side. I run over there (to the offensive side), and it's too late. We're already out. I think that Andrew deserves to get in there and do something like that."

Remember for a second that Greg has a co-defensive coordinator that can handle those types of things and the game was so far out of reach at this point, what was he so worked up about anyway? The Axeman shares his own thoughts on the topic in his wrap-up:

"I'm coaching over on the defensive side?" What the heck does that have to do with anything? Do you not have a headset on to tell someone to put the kid in? Are you actually admitting you got distracted during the game, Greg?

Not that putting Robinson in the game was crucial by any stretch, but that quote is just unbelievable.

Anyway, I also find it interesting that Robinson was spotted, on camera, talking passionately to Andrew on the sideline in the final minutes of the game. Why else would Greg be talking to his backup QB at that point other than a discussion along the lines of "be ready next game".

To get the rest of the story, you can go checkout Bud Poliquin's video review of the game (nice of Bud to make this week...). Don't bother the crying child, she's been cued. The Three Idiots think a case of Red Dog "premium" beer might have something to do with the 2nd half onslaught.

Also, you can go over to SUAthletics.com where, um, hey where IS the game wrap-up? It was on and off the SUAthletics homepage so fast not even the USF defense could have caught it in time. When you do actually find it, you find out the big story was actually Pat Shadle's two field goals.

Finally, it's worth noting that Syracuse wore white jerseys and white pants for the first time since 2005 (at Florida State). Good to know that's our official State of Florida outfit. But considering how well we fared in both of those contests, let's not go and make this our Notre Dame green jersey just yet.