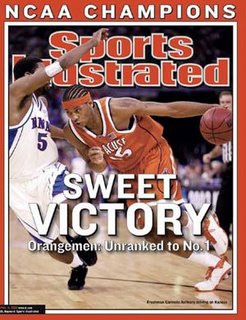 And if you know who Ramel "Rock" Lloyd is, I probably went to school with you.

So before the Suns-Nuggets preseason game on Friday, Carmelo not-so-subtly intimated that he wanted his jersey to be retired soon. Classy. I made the assumption that this was already in the works, likely to coincide with the opening of the Melo Center (Excuse me, the DOCTOR Daryl Gross Presents Melo Center). I might not have been right about the timing but the entire thing is indeed already in the works, says Jimmy B:

"We're trying to find a break in the schedule," Boeheim said before Anthony totaled 14 points, nine rebounds and five assists Friday night to lead his Nuggets to a 94-91 win over Phoenix in a preseason game at the Carrier Dome. "We'll look at this year's schedule and next year's schedule and we'll figure it out."

Boeheim added one awesome note that is sure to wrankle DOCTOR Gross' ego to no end:

While all the honored players attended the school for at least three years, Boeheim said it doesn't matter Anthony played just one. "There's a criteria," Boeheim said. "It's if I say so."

Boeheim 3:16 says Jim just laid the smack down! (A wrestling reference? And an outdated one at that. Ugh to myself)

Mike Waters agrees that Carmelo should be honored...eventually. But there's a lot of other great SU players who deserve the honor and are still waiting. It does seem strange that Lawrence Moton, SU's all-time leading scorer in an age where those kinds of records are usually broken every couple of years, continues waiting for the honor.

And yeah, we should probably at least wait until the guy is out of his 20's. But what do I know...