Share All sharing options for: Orange::44 Is An Absolute Magician 16.0

You know the drill by now. Brian from Orange44 and I trade weekly Q&A's about all things Orange. This week its his turn to answer and he comes clean about the USF game, Greg Robinson's mental state and early thoughts on SU basketball.

At halftime of the SU-USF game, did you feel like this was Louisville 2007 all over again or did you suspect the game would eventually get away from the Orange?

I never had the feeling at all that we would win this game. The Bulls were clearly in control from the start and could only put in so many want-to's before they collapsed. This outcome of this game was never in doubt. Sorry to be so grim, but if anyone thought a potential upset was brewing in this game, you either do not know football or you are living in a van down by the river. 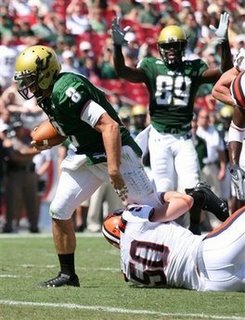 Greg Robinson basically admitted he's unable to multi-task during the game, is there anything left he can admit that will convince any remaining people that he's unfit for this job?

I'm guessing the only thing he could do is actually admit that he is not a good head coach, and actually say those exact words. Clearly he has said everything else but. When is this guy going to be cut loose? What else can he possibly screw up? This is just hurting recruiting and money by the boatloads, never mind the psychological impact it is having on the fan base and student body. I'm waiting for the moment, like in Super Troopers, when Greg gets up and says "Oakley dokley… I'm an idiot!" Maybe then he will just fade away into obscurity, never to be heard by an SU fan again.

Greg Robinson made a prediction that can still rattle off five wins and go bowling. Does he honestly believe this or is he saying it just because he thinks he has to?

If he believes it, he is even more of an idiot that anyone could have possibly imagined. I'm guessing this is just part of his standard rhetoric. Much like a good politician, he has no choice but to simply stay on message and hope the public is dumb enough to buy it. But no one is buying a one win season, no matter how much want to those kids have. And believe me, I do feel bad for the kids on the team and the kids at the school. But judging by the average student attence at the games, you and I are hurting more than those students are. Either way, he is saying it because it is all he has, but that just makes it worse. At this point I might even be alright letting the guy finish the season if he was just honest about the level of achievement and how the team is performing with the general public. But alas, he is still in Greg's World, and we're all just watching it slowly collapse around him brick by brick.

Should Andrew Robinson replace Cam Dantley as starting quarterback? Or at least should it be a two-headed monster against ?

This is a touch question because neither you nor I are in practice seeing how these guys are doing. What I do know is that "Cantley" has been pedestrian at best the last two to three weeks and Andrew Robinson smacked L'Ville up last year pretty hardcore. So at the very least based on the history I think I'd probably give the start to Robinson. Especially since Cantley has cooled off the last couple of weeks. Plus, it is not like this game has a huge impact on the season one way or the other. There is essentially no tomorrow for these kids so why not give

Robinson the job back and see how he does at this point. Clearly Cantley isn't the game changer that can take over the and lead them to victory. I think everyone can see the key to winning is a defense that can stop the pass and last all four quarters. The Quarterback of the Syracuse Orange has had very little impact on any of these outcomes as of late. So give Robinson his job back, at least for now. What harm could come of it right? Plus, the storyline of him coming in to try and beat the team he upset last year is too good to resist.

Early basketball previews have the on the fringe of the Top 25. I happen to think this team is better than that. What do you think?

I agree, this team is better than that. And I am not saying that as a homer either. Looking at the team, it is essentially the same team as last year, minus Donte Greene, plus Devo and Rautins and three top freshmen. Oh yeah, and everyone that played last year is better than they were. Hello! We started in the Top 25 last year at the top of the season and this team is better. In losing Greene, we lost a three point shooter, but we gained our two long ball studs back from . While we will miss Greene's height on defense, the fact that our offense will be better clearly makes up for it.

That being said, I am totally fine with the team actually being unranked and flying under the radar for the non-conference slate. The preseason poll does not matter one bit, and really in my mind the rankings do not matter either until conference games start for everyone. I mean, UConn will probably be ranked in the top ten all non-conference season if they win out (which they probably will). However, they are playing the likes of Quinnipiac and Southern Connecticut State University (or as I call it SoConn). These schools are not tests, and frankly they should not be rewarded for playing that ridiculous non-conference schedule that they do every year. Just because they play LSU (woah!) and Indiana (holy crap!) does not mean they have a strong non-conference schedule.

And THAT IS HOW YOU DEBATE! Woah, sorry. I blacked out there for a minute.

We know Flynn, Devo and Harris are going to make big contributions but who's going to be the surprise star this season?

If you could select the cover of bE Magazine's Winter 2008 edition, what would it be?

First off, I didn't even know that the Athletic Department had its own magazine. But even if that is the case the good Doctor should not be on it. What has he possibly done to deserve that? Clearly, I would put something about The Express. They would be crazy not to. Even though the movie is "historically inaccurate", it is not just any program that is getting a major motion picture made about it. It should be the highlight of the year, save another national championship in something. So put good ol' DQuaid on there as Ben, or maybe Rob Brown as Ernie Davis winning the Heisman. But not Doctor Gross. Not him.

However, I guess he is better than Greg.

Did you see The Express yet? Thoughts?

I've seen it twice now. I was at the World Premier at the Landmark in , which was very awesome. I again saw it October 12th, after it opened to the public. I enjoyed it greatly both times. I must admit, the first time I saw it I was taking in the atmosphere of the world premier and I was looking for inside and references, and the crowd was very loud, especially when they first showed the campus. The second time, I just enjoyed the story and the movie as a fan. Both times I really enjoyed it and I cannot recommend it enough to any fan, football fan, or football player. A lot has been said recently about the fact that it is not awesomely historically accurate. Frankly I could care less honestly though. Movies are supposed to be entertaining, and this one is entertaining and inspirational.

Definitely go see this movie if you are reading this and haven't already.

Thanks again to Brian and keep an eye on Orange44 for more Orange-y goodness.