Orange Ready For Flamerica. So Far.

Share All sharing options for: Orange Ready For Flamerica. So Far. 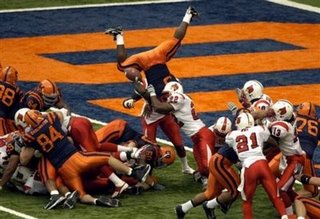 Some news and notes to get you up to speed on Syracuse's game with Flamerica University this weekend:

Delone Carter is going to play. For now. Delone is doing his best to stay positive.

"If it ain't something, it's something else...It's extremely frustrating, you know what I'm saying? But everything happens for a reason. I have to be positive about my situation."

Doug Hogue? No word yet on whether or not he'll play. You may have noticed a little rumor that popped up on the message boards last week when someone purporting to be Hogue's high school coach saying that Hogue was actually on some kind of double-secret suspension and that's why he's not playing. Still just a rumor for now.

As for the running back actually playing and performing, Curtis Brinkley is having a breakout year so far. WTVH recently did a story on Brinkley's success entitled "Curtis is Cruising." Let's just hope it's not this kind.

QB Cam Dantley will have his hands full this weekend but he's doing his best to learn from previous mistakes. Greg Robinson certainly thinks he'll improve:

"Can he get better? I know he's going to get better."

Given how everything else that Greg "knows" has turned out, expect Andrew Robinson to start against Louisville.

Donnie Webb reports it's gonna be a hot one on Saturday with temperatures expected in the mid-80's. Donnie also mention Da'Mon Merkerson is probably back at receiver after switching over to defensive back.

Got this email from Mike in New York City that should make DOCTOR Gross happy:

So I got the Metro Newspaper in NYC this morning on my way down into the subway like every morning. It is a free newspaper and its competition is AM New York. Anyways..to my surprise there was a half page about Syracuse in the sports part. And a big picture of Brinkley.

So if you're in NYC, pick up a copy. Or, I guess you could just read the article on their website. So...cancel that JetBlue ticket to LaGuardia. Mike did add one more thing...

FYI, the article sucks. I was actually angry reading it.

Turning to the head coaching picture, with all of this talk from alums about Steve Addazio, it was kinda weird that no one actually stopped to ask Steve what he thought of all this attention. Greg Auman of the St. Pete Times finally stepped up:

Offensive line coach Steve Addazio declined to comment on the e-mail sent by former Syracuse players to the school's president and athletic director calling for him to replace current coach Greg Robinson. Addazio was an assistant for Syracuse from 1995-98.

"I have no comment on that. Thanks," Addazio said in his first comments since the e-mail surfaced two weeks ago.

I mean, Addazio or someone close to him HAS TO be behind the scenes on all those emails, right? There's no way so many alumni put that out there otherwise, right?

Also got an email from Brian H. who posited a new name in the search...Ball State head coach Brady Hoke. Good point...they are 7-0 and the former Michigan man is sure to be coaching elsewhere next season. Add his name to the list.