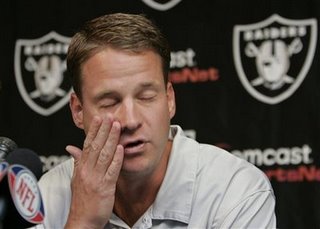 Don't you dare mention for a second any rumor about the Syracuse head coaching position or God as my witness, Jesus will strike you down with a lightening bolt from his diamond-studded chariot in the sky.

But feel free to speculate about Lane Kiffin til you pass out. That's cool...

That's right, Kiffinmania has taken over in Syracuse. Pretty much everyone over at Syracuse.com has something to say on the matter...

Donnie Webb worries about the risk/reward involved with hiring Kiffin. He also warns that he doesn't think the coaching change will go down anytime soon, so don't get your knickers in a bunch.

Recruiting, as we all suspect, is dead in the water. It will not change until there's a new coach in place. Kiffin, in theory, could get in here today and start knocking on doors and punching cell phone numbers. That's the huge appeal of getting Kiffin to Syracuse on the first plane from Oakland. Kiffin was recruiting coordinator at USC and clearly knows the business of talking the talk and walking the walk. The salvation project must begin with getting better talent on campus.

But here's the rub - to bring Kiffin in during the season also saddles Kiffin with whatever happens with the remainder of the Syracuse football schedule. There are significant risks including the team going in the tank, a disgruntled coaching staff facing the unemployment line and a defense that will not be fixed in a month's time. The Orange could easily go winless with or without Kiffin. But let's say Kiffin comes in and finishes out with a team that goes 0-4 or 0-5. Do you really want your new football coach going on the road with that kind of needless and perhaps damaging baggage? Recruits may only see same old same old. Does it not make more sense that he gets a fresh start, as soon as the Cincinnati game ends and the Robinson era is put to bed, to then hit the ground running? Kiffin or whoever might want/demand it that way because he's free to preach the gospel of a new vision and hope for Syracuse football. He's got a better chance of talking players out of their verbal commitments with a clean slate than he does if he comes in and is already 0-4.

At this point, I'm inclined to agree that it seems like Robinson is going to be around for the long haul. I mean, if you were going to fire him, you'd have done it already.

Bud Poliquin worries that Lane Kiffin is just a younger version of Greg Robinson. He also offers up some thoughts on who he'd hire in a perfect world:

My ideal candidate to take over the Orange -- barring, of course, a Robinson miracle of Lazarus-like proportions -- would be a 40ish-year-old, offensive-minded recruiter supreme with head-coaching experience (and success) on the college level who'd (a) recognize that the Carrier Dome, if properly utilized (read: spread offense), would become the No. 1 home-field advantage in all of college ball, and (b) recruit with abandon (and with success) up and down the eastern seaboard from Bloomfield, Conn., (hello there, Dwight Freeney) to Miami, Fla.

What the Orange doesn't need is another defensive-oriented NFL guy (sorry about the redundancy) with USC ties who's never been a college head coach and knows almost nothing about the territory that is college football in the eastern time zone.

ESPN's Brian Bennett doesn't seem to think Kiffin is the answer for SU either.

Of course, we're all so busy worrying over who the next guy is gonna be, we've almost forgotten that Greg is still here. He is, but even outlets like USA Today are making note that his time is short. Pat Forde thinks only a miracle could save Robinson, and he's right.

Lost in all of this is probably the effect all of this is having on the Robinson family. A wise reminder by The Orange Squeeze that we should all probably take a step back from time to time. Until Greg opens his mouth again.

Then there's Dennie Dodd, who not only comments on the Lane Kiffin issue but throws out some random new names just to keep things interesting:

Kelly doesn't have any ties to the school but coached in the region at New Hampshire. Kelly is doing a great job at Oregon but let's just say the interest would be mutual if Syracuse called.

Ah, the New Hampshire recruiting hotbed...we'd own it!

So what's the correct answer in all of this? Here's how its gonna go down: