If You Haven't Torn Your ACL, We Don't Want You

Share All sharing options for: If You Haven't Torn Your ACL, We Don't Want You

Syracuse Basketball's training staff has become quite adept in recent years when it comes to rehabbing and working with players that have torn their anterior cruciate ligament. The work they've put into Erc Devendorf and Andy Rautins has opened up a whole new world of medicine and technique. Clearly the coaching staff feels like it would be a shame to waste such specialized talent. 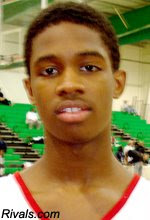 And so, apparently, they've instituted a policy of only recruiting players coming off of ACL injuries. Brandon Triche will represent the 2009 class and now Baltimore's City College High School's C.J. Fairwill keep the streak alive in 2010.

The 6-foot-8 lefty would be a part of the 2010 class. He made his decision before heading to Syracuse this past weekend for a visit.

"It was a family decision and I thought it was good fit for me and my future," the junior Fair told DigitalSports in Baltimore. "The combination of playing time and who would be leaving, I just fit perfectly with my class coming in."

Fair is recovering from an ACL injury suffered last spring. He’ll start jogging next week and hopes to suit up by Christmas.

A shooting guard, Fair is rated as the 48th best prospect of 2010 by Scout.com and 45th by Rivals.com. According to Mike Waters, Fair chose the Orage over Louisville and Virginia, bowled over by his third trip to see the Orange this weekend.

Fair said he liked everything about his visit to SU. He got to watch the Orange men in their first official practice on Friday. Later that day, he and his family took in the NBA game at the Dome. They met with the Syracuse players, coaches and the team's academic advisor. By the end of the visit, his choice seemed so obvious that he was willing to change the plan and commit on the spot.

Welcome aboard C.J., put some ice on that ACL and we'll see you soon enough. In the meantime, check out some footage of Fair, apparently shot in 1977.