I don't have to tell you that Donte Greene's defense left a little to be desired last season. But we wondered how much NBA teams were listening when we warned them. Well Sacramento's head coach Reggie Theus, Donte's boss (for now) finally knows:

"I've got my work cut out for me," Theus said after Tuesday's training camp session. "(Greene plays) great offense and has no basic understanding of how to play defense."

Theus said he considers the forward a "project player," because he has "never really been taught anything about defense at all." 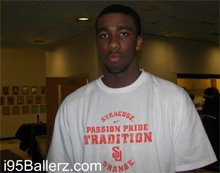 Take about a Hadouken to the ego. Not to worry though, Reggie will whip him into shape. If he could turn the Deering Tornadoes into winners, he can teach Donte Greene how to play some D.

Donte added that he's ready to go this season and excited to work on his defensive abilities:

"I'm just trying to learn new techniques and a better way to guard my man."