No matter what we say about the result of the 17-6 loss to West Virginia on Saturday, we can't fault the effort of the players themselves. It was a commendable performance on multiple fronts, especially by the unit we rarely say that about...the defense. You and I both know this was a 10-6 game. And maybe that Noel Devine TD run and the end result were inevitable, but credit where credit is due to an Orange team that should have had no business even being that close, that late.

Yes, Noel Devine rushed for a career-high 188, but 92 of those came on one play. QB Jarrett Brown looked shaky and unsure at most times. While the Orange didn't exactly tear up the Mountaineer D, they were able to put together a couple decent drives with a newfound dink and dunk passing game that offset Curtis Brinkley's ground attack. Without Pat White, the West Virginia offense looked downright Syracusian. Had we not had the benefits of uniforms it might have been hard to differentiate each team. If this is what West Virginia has to look forward to when Pat White is gone, they have good reason to be worried.

Speaking of the SU offense...so THAT'S what passes look like. Cam Dantley attempted forty passes...I'll let that sink in...and he completed 24 of them for 204 total yards. Ten different Syracuse receivers caught passes. I didn't even know we had ten eligible receivers. The bulk of them were indeed dinks and dunks for short gains but the effect was huge. West Virginia's D was confused by the opened up offense across from them. Of course, not confused enough to allow the Orange to capitalize of their ball movement.

Curtis Brinkley continued to do Curtis Brinkley things, rushing for 144 yards on 28 carries (5.1/carry). The only other back to see any action was Antwon Bailey with 10 yards on 3 carries. Wither Doug Hogue (he did not play)? That pre-season battle to find out who was the #1 halfback on this team seems to strange now, doesn't it? 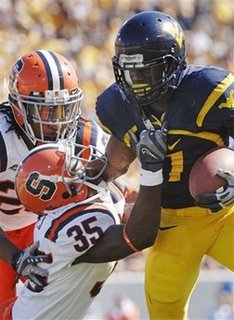 Defensively, the beleaguered Syracuse unit did about as much as we could have asked them to do for as long as they did. When Noel Devine finally broke out on his TD run late in the fourth to ice the game, it was almost as impressive that it took so long for it to happen at all. If you told me beforehand that the SU defense was going to hold the Mountaineers to 17 points, I would have taken that in a heartbeat. Alas...

That brings us to coaching. As I write this I haven't looked at Syracuse.com or anyone else's wrap-ups but I'm sure everyone is talking about Greg's two decisions to go for it on fourth down. We've given Greg a lot of grief, well-deservedly, over his lack of cojones and his lack of smarts in these kinds of situations in the past. This time, I'm not so sure you can argue with Greggers quite as much (Oh God, am I about to defend Greg Robinson?)...

Trailing 7-6 in the 3rd quarter, the Orange found themselves in a fourth-down situation at the West Virginia 43. The "smart" play would be to punt, try to pin West Virginia down and let your D, who has actually been playing well for once, hold them down. But Robinson decided to go for it. I'm fine with the call, gutsy may it be. My problem is with the mindset that SU's coaches then went into.

What's been working all game? Running with Curtis Brinkley and throwing short passes. What hasn't been working all game? Throwing long. What do the Orange try to do? Throw long. Cam's pass is batted down at the line, turnover on downs. West Virginia drives and kicks a field goal. Okay fine. Didn't work out, but lesson learned, right? Well...

So now it's late and the Orange need a touchdown to win it. They drive down the field, nipping yards here and there. But time is a factor. So they are trying to air it out. And it's not working. As we've learned. But they manage to get down to the 11 for a first down. The Orange probably should have just put it in Brinkley's hands from the get-go but instead they try to pass on first down and it's almost intercepted. They finally give it to Brinkley on 2nd and 3rd downs but he can get them only to the five. Fourth down.

NOW, you're down 10-6 with just under five minutes left. Plenty of time to kick the field goal and then get the ball back for another one. But let's take a step back. You've only scored two field goals all game up until now. And your defense, which has played well, is tired. And it's looking at some weapons across the field that could break free at any moment. So yes, the smart play is probably to kick the field goal and play to get the ball back. 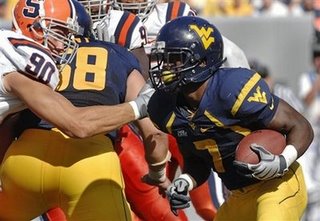 But let's be honest. What are the odds we make the field goal, stop a wide open West Virginia offense fairly quickly, get the punt, drive another 30-40 yards at least and then make another field goal...all while knowing we have no deep passing game? Probably about as good as going for the touchdown here and putting the pressure on West Virginia to score a TD instead of a field goal. So I understand why they went for it.

Of course, they didn't get it. Dantley's pass was forced and the Orange turned it over. Then...Devine Intervention.

By the time the Orange got the ball back it was too late. Game over. So close but, well, you know the rest.

Bud Poliquin provides his own video recap of the game, albeit not from West Virginia but from your backyard.

I have to admit, I was ready to hear a bunch of "We played well, so..." quotes from the SU locker room like we did after the Northwestern loss. But I was happy (if that's the right word) to see that the end of the game angered this team to no end:

"About in tears," senior defensive tackle Nick Santiago said, describing his mood. "It kills me. It kills everyone. You just want to run into a wall."

"It's getting tough," sophomore safety Max Suter said, his cracking voice and blinking eyes revealing the deep pain still stabbing him in the gut. "Yes, it is."

"It hurts, man," Santiago said. "It hurts. We played hard and shut them down. It hurts. It hurts."

"These are the losses that hurt the worst," Holmes said. "It's very disappointing."

"It's a little bit sickening to play as well as we did and lose," senior kicker Pat Shadle said.

They're not dead yet. Least not off the field. And that's to be appreciated.

As you can imagine, Robinson felt the need to defend his 4th-down decisions:

"No, I don't regret it," Robinson said. "I felt at that time, we had an opportunity to try and take the lead. If we kicked a field goal right there ... the thing that we had was this - and again, it's easy to always look back and question; and some at that time might have questioned; the logic that I had was this - at that time, the score was 10-6. We had driven the length of the field or we had a real sustained drive. We really pounded them. I felt like if we could get down there and score the touchdown and put them in a position where they're behind and they have to go into more of a two-minute mode, I thought we would be in control. I also thought if we were unable to score a touchdown right there, I thought leaving them at the 5-yard line with the amount of time that was left, I thought we could stop them down there, use our timeouts and still get the ball back.

Like I said, I'm fine with it. What I'm not fine with is that moments later, Greg decides to throw one of his players under the bus...

You know what, you basically kept one of the fiercest rushing attacks in the country in check all day. It was only a matter of time. I'm pretty sure that player knows who he is and he doesn't feel good about it. He certainly didn't need his head coach to publicly drop the hammer on him. It's things like that, Greg...it's things like that.

Going back to the note that only Brinkley and Bailey played in the backfield, Doug Hogue's absence was due to a tweaked ankle. Ugh. 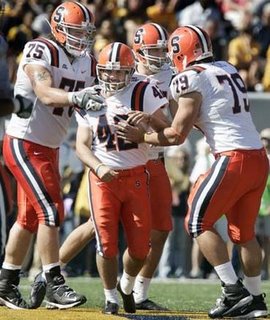 SUAthletics decided not to focus on the actual game itself (of course) but instead of hometown boy-made-good Pat Shadle and his 53-yard field goal, the longest in the history of Mountaineer Field. It was also the fourth-longest kick in SU history. And it got Greggers excited. So that was nice.

In closing, Greg had this to say about his team which seems to be closing the gap on better opponents:

"There's things there leads you to believe the team is getting better and against good football teams, very close to winning football games."

Syracuse Football 2008: Very Close To Winning Football Games. Let me know when that T-shirt is out.