The De-Nike-fication Of Erine Davis Has Begun

Share All sharing options for: The De-Nike-fication Of Erine Davis Has Begun 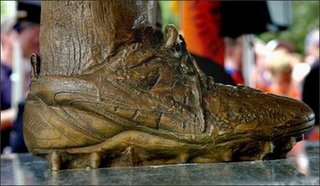 Just yesterday it occurred to me that after all the "easy fix" rhetoric we heard out of SU over the Ernie Davis' Nike logo-strewn statue, nothing had actually been done about it. Took about a month but Donnie Webb reports that the changes are finally in the works:

Less than a month after being unveiled on the Syracuse University campus, the monument to the iconic Orange football star was removed from its marble pedestal on Wednesday.

University spokesman Kevin Morrow said the statue was successfully detached, carefully packaged and is scheduled for transfer on Friday to the New York City studio of sculptor Bruno Lucchesi. The artist has agreed to make modifications to fix the shoes, helmet and football with period-appropriate equipment.

Morrow said the university will absorb all financial costs in the repair of the statue. He said there is no timetable for the statue's return to Syracuse and that Lucchesi has "as much time as he needs. As noted previously, we greatly admire Bruno's skills and are very appreciative that he is working with the University to make the necessary modifications to the statue."

How is SU ensuring that the helmet, uniform and cleats are era-specific this time? Hollywood! The same company that made some of the uniforms and gear for The Express is also providing Bruno will the appropriate items needed to rework the statue.

And so, we wait patiently for the real final product. Something tells me DOCTOR Gross et. al are actually going to give the state a once-over this time before just throwing it up on the pedestal.

Any guesses as to when we'll see it next? If I were thinking like a SU Athletics marketeer, I'd save it for the first football game next year and work it into halftime. I'd refer to the entire day as "Redemption Day" and I'd invite former SU coach Greg Robinson to come and redeem himself by kissing the statue's Swoosh-less shoes. All will be forgiven in regard to Robinson and the Ernie Davis statue and we'll begin our 13-0 National Championship 2009 season in style.

SU Athletics, you're welcome. You can make my check out to CASH.