Share All sharing options for: Can We Get A 14-Point Head Start?

Dave Rahme's got his official preview of Saturday's game up. He notes some particularly fun stuff to get you excited:

The Orange, which leads the overall series 30-25 but has lost the last six, has been roughed up by an average score of 37-13 in the last three meetings. Robinson's "4-3 under" defense has been shredded by West Virginia's trendy spread no-huddle offense for an average of 462.3 yards, 293.3 on the ground. His pro-style offense has been smothered by West Virginia's funky 3-3-5 stack defense, averaging an anemic 177.3 yards, 64.3 on the ground.

The last time Syracuse (1-4, 0-1) visited West Virginia (3-2, 1-0), Mountaineer quarterback Pat White rushed for 247 yards and four touchdowns and WVU rolled up 457 yards on the ground, the most yielded by an Orange defense in school history. 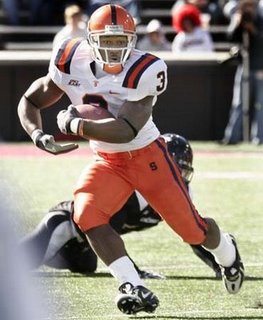 If the Orange do plan on beating the Mountaineers it looks like they're probably going to have to do it without Delone Carter after all. Earlier in the week it sounded like Carter was a-go for the game, now he's listed as doubtful. I'd say that maybe this is some sort of Belichickian tactic but then I remember that Greggers is involved, so I'm assuming he's not gonna play much.

The good news is that, with or without Carter, our offense is much better than last year's, you guys. Mitch Browning has high standards for the offensive unit but despite the improvement, they still have a long way to go:

[Standards are] extremely high considering where the offense was a season ago when it averaged 15 first downs, batted only .280 on third down and traded every seven passes for a sack. And sure enough, SU is averaging just under 15 first downs a game this season, far below the goal. It is allowing a sack roughly every 17 passes, a huge improvement but still short of Browning's standard. Its third-down success, as noted above, is an unacceptable 26.3 percent. McKenzie knows the end result.

But its not just the defense that's making changes, the defense is apparently making some moves according to the D.O.:

Expect a new defensive package on Saturday in Morgantown, with Kevyn Scott playing some corner. Scott, a redshirt freshman, started at safety against Penn State, but was replaced by AJ Brown. Scott didn’t give too many details on the new package — for obvious reasons — but the move makes sense. Facing West Virginia’s spread offense (with speed demons such as quarterback Pat White, tailback Noel Devine and playmaker Jock Sanders) puts pressure on the edges, and the corners need to be able to tackle.

At this point, might as well try anything. Oh, and if thee Orange want any chance to stay in this game they're going to have to keep these three very important players in check.

As for official predictions... 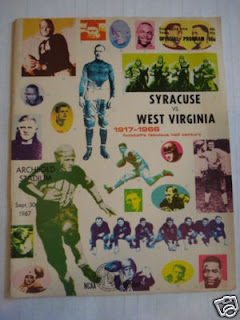 Brian over at Orange44 doesn't like to get specific but he's in his usual realistic but hopeful form:

I simply think West Virginia’s desire to win, plus their talent will carry them, even if they do not play their best game. West Virginia over Syracuse by ten is my prediction. Hopefully Syracuse will keep it close and be competitive. Hell, I’m even rooting for an upset this time, because I think we all know nothing will keep Greg Robinson his job at the end of the year. At least that is how it should be.

Over at Three Idiots, Champ and Russianator are less hopeful.

As for myself...I'd like to tell you that I think this West Virginia team is vulnerable and that their early-season losses bode well for us. But I do not. I don't see this game going any differently than any other WVU game we've seen under the Greg Robinson Regime. West Virginia has too many weapons and our defense does not, whatever the formation. I wish them well this weekend but I'm thinking...

The good news is, even if we get crushed, we can still have a good time by playing The Greg Robinson Drinking Game. Keep a keg nearby, you're gonna need it.