Syracuse To Break Out Black Jerseys For West Virginia Game

Share All sharing options for: Syracuse To Break Out Black Jerseys For West Virginia Game

SYRACUSE, NY - Syracuse head coach Greg Robinson announced on his weekly teleconference Sunday evening that the 1-4 Orange will wear black jerseys against West Virginia (2-2) in their game next Saturday. 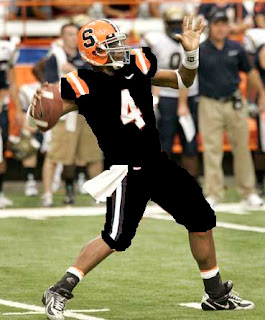 "We're wearing black because we're going to a motherf***in' funeral," was overheard during Monday's practice by Syracuse Strength and Conditioning Coach Herm Sneedgrass.

It's the first time Syracuse will wear black jerseys. Black is not an actual school color but Coach Robinson added it seemed "apropos" and he urges fans to dress in black to support the team this year.

"The seniors asked me after the game if they could black this game out and I said sure," said Robinson. "I later found out what they meant was that they didn't want the game shown on any television stations, but by then we had already placed the order with Nike, and our deposit is non-refundable, so...that's that."

As a special bonus, Syracuse Athletics has decided to spray paint the Ernie Davis statue so that Ernie's Nike jersey is black as well. Local car dealer Dey Chevrolet contributed the donation for the spray paint so their logo will be affixed to the back of his new jersey. As for how the paint will be removed after the game, Syracuse Athletic Director Daryl Gross wasn't concerned:

The spray paint removal is currently scheduled for 2011, the same as the Nike logo removal plan.

"You know why they're wearing black?" asked Mountaineer quarterback Pat White. "Cause they're going to a mother...wait, they already said it's gonna be a funeral? Their funeral? Jesus, that's dark."

(Photo is an "artist's" rendering. And no, this isn't actually happening...)