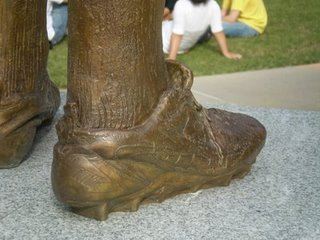 It's been a heady couple days for Ernie Davis statuephiles. First, they see their one reason for living erected. Then they find out there might be paid advertising on it. Then there's was word from the Chancellor's office that it was all a big whoops. Then the swooshing was shown to be quite extensive, much more than first though. Then the good DOCTOR put it all to bed...kinda.

The story caught fire over the last two days and it has peaked now that the AP have gotten a hold of it. (Note for whoever wrote the headline for the story...1995 called, it wants its popular phrase back) And even though cooler heads have seemingly prevailed, it was probably in SU's best interest for us not to find this out:

Morrow said the university took possession of the statue in early August, but it was kept secure in its protective packaging to avoid damage until it was moved to its final destination and unwrapped late last week.

Morrow said the university was aware of the errors before an online blogger first pointed them out, but there wasn't enough time "to take corrective action before this past weekend's activities."

For the sake of argument, let's assume that "early August" means August 10th. The unveiling was September 13th. That's a month. 30+ days. More than enough time to do whatever it is one does to erase swooshes from a statue. And if the implication is that they didn't realize it until a week before, sorry but that's still 168 hours of round-the-clock work that could have been done to save yourself the headache.

And why was it better to just let the logos remain on the statue, place the statue in the Quad and THEN make the fixes? Wouldn't it make more sense to have done the fixed indoors in a studio or other secure location? I assume they're not going to take the statue down and send it back to New York City for a redo.

(Unrelated, what is this policy of not crediting "online bloggers?" I don't know if that's refering to me or someone else but it's irrelevant. If the New York Times was the first outlet to point this out, they would have been credited. If a regular person blew the whistle on this to the news, he or she would have been credited by name. But because it came to light on a blog, that's not allowed to be credited? I'll remember that the next time John Kekis breaks a story...)

Crediting-issues aside, AP-writer-whose-name-suddenly-escapes-me did do the one thing no one else has yet, confirm with Nike that this wasn't a shady sponsorship deal:

In other words, "we would have LOVED to have besmirched the memory of Ernie Davis by smearing our logo all over his statue but since we didn't, we didn't."

Yes, I just wanted to use "besmirched."

The writer (do I credit him? I'm not sure how this works anymore.) also spoke with a couple SU players who were fine with the statue, even with the errors. The final word belongs to SU tackle Anthony Perkins who makes a rather astute observation:

"It's a little symbolism — new school meets old school," Perkins said. "I believe if Ernie was here today, he'd have a pair of Nikes on."

You're absolutely right, Anthony. If Ernie was playing for Syracuse right now, he would be wearing Nikes. He wouldn't have a choice.