Why do hard work researching your opponent when you can trick a fellow blogger that covers that team into doing all the heavy lifting for you? It's with that kind of integrity I asked Chas over at Pitt Blather (and Fanhouse) a couple questions about the state of affairs in Pittsburghville and what SU fans expect from the Panthers this weekend. 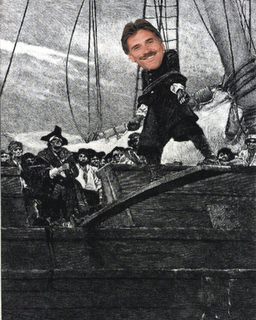 How about instinctive like a fox? When in doubt he reverts to his basic instincts and tendencies. That is, play conservative and not not to lose. Especially after taking a lead. Lean heavily on the defense to win the games, to the point of crippling the offense and wearing out the defense.

And, by god run that ball straight up the middle at all times. It's a power running team that is what he truly wants to see from him the offense. Even when the O-line can't do it. The Wannstedtian instinct overrides all.

We're running a contest on the site this week to guess how many rushing yards Pitt will rack up in the game. Care to take a stab at it? Justify your pick.

I figure that's about the right number. I expect that McCoy will get about 100 yards. Stephens-Howling will get somewhere around 30 yards. Collins will get 15. Cross will have 20. Stull will be sacked a few times for -12.

Yes, I know the run defense has been sieve-like, but even G-Rob will know to stuff the box against Pitt. Pitt, won't deviate from the plan. Run the ball, no matter what.

Who's this fella at QB for you? I thought Tyler Palko was in his 9th year.

Tyler Palko was placed in suspended animation prior to the end of the 2006 season. It's an obscure NCAA eligibility rule, but if Palko remains in cryo for at least 4 years he gains a couple more years of eligibility. The plan is to thaw him out sometime after Pitt hires an offensive coordinator that thinks throwing downfield is not the work of the devil.

The guy in there is Bill Stull. He was supposed to be the starter last year, but had torn thumb ligaments in the 3d quarter of the 1st game last year. He's now a redshirt junior.

Coming into the season, Wannstedt spoke of Stull being a secret in the Big East and that he was going to break-out this season. After the season started, the narrative shifted to how Stull is only making his first few starts, so he is learning. I hate revisionism.

Stull isn't that bad. He hasn't been that good, either. He is not a threat to throw the deep ball (with any accuracy). Given Pitt's offense, most of his throws are short and out into the flat.

Get us up to speed on the Pitt-Iowa game. It was a 1-point win but was it a gritty, feel-good 1-point win or a shoulda-been-more nailbiting 1-point win?

It was gritty, but not feel good. Pitt went up 14-3 and then had 6 straight 3-and-outs over the next two quarters. The Pitt offense was fully castrated by Wannstedt and Cavanaugh apparently feeling that they had the game won and just needed to play defense the rest of the nearly 3 quarters.

Thank god Kirk Ferentz proved to be Wannstedt's gameday equal by going with a bad QB over the one that was actually making plays against Pitt. fans are quite pissed as they missed plenty of opportunities -- settling for a FG off of a turnover inside the 20 and a missed 35-yard FG late in the first half. Seven points that they could have used.

Defensively, which player is going to be hanging out with Cam Dantley in the backfield most often?

Greg Romeus and Jabaal Sheard are the DEs who should be coming off the edges. They are the kind of DEs Wannnstedt -- and most DCs these days like. Athletic, fast, maybe a little undersized. I'll go with Romeus, because he is much more of a pass rusher.

The Dome crowd is a little less...there...these days. It won't take much for Pitt fans to take over the stadium...think we'll see a big draw?

Well, the reputation Pitt fans have for passionately following the Panthers anywhere they play is known far and wide.They spare no expense when it comes to Pitt, and have taken over the home field of so many others venues. I expect the Pitt fans will pack the Carrier Dome like they have at so many other places.

Okay, now that I've left Bizzaro World, I would expect that there will be lots of exposed seats in the Dome. Have you seen the price of gas?

Seriously though, UConn's not gonna win the Big East, are they?

Magic 8-Ball. Eight team conference. I asked. First, I got "Ask again later." Then it was "Cannot predict now." I admit, I'm a little unnerved now.

Quick jump to basketball...Jamie Dixon just got a contract extension, how pleased is Pitt Nation (Panther Nation? Which Nation do you prefer?) with his body of work? 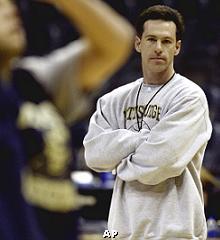 I don't really have a preference. I think it's Panther Nation, but I'm a bit sick of the whole "[team x] nation" thing.

I'm thrilled with the extension. has turned out to be a very good coach. Recruiting has steadily improved every year. Staying in the top 3-5 of the BE every year is not something to be dismissed casually. This has been the longest stretch of sustained success in Pitt basketball history.

Now, it seems to be about breaking through the Sweet 16 sometime soon.

Keep an eye on Pitt Blather over the weekend for last minute updates, Wannstache humor and other bon mots. Rumor has it they're doing a chat over there as well so you'll be able to talk to a real life Pitt Panther fan. Thrilling!