Share All sharing options for: Stop Encouraging Him, Utah Jazz! 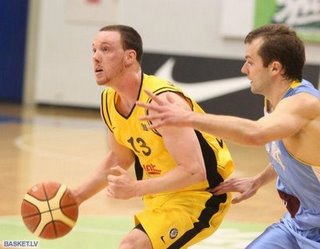 Let me tell you about a place where the beer flows like win. Where beautiful women instinctively flock like the salmon of Capistrano. I'm talking about a little place called...Latvia.

Gerry McNamara had it made. He had a contract with one of the top teams in the basketball mecca that is the Latvian Basketball League. But the call of the NBA is too strong. Too sweet. Too powerful to ignore. And so, Gerry's gonna give it one last hurrah...again...

Gerry McNamara has accepted an invitation from the Utah Jazz to participate in the team's preseason training camp, according to McNamara's agent.

Bill Self, of SAGA Sports, confirmed Tuesday morning that McNamara had been invited to Utah's training camp.

Utah's camp opens on Sept. 29. And while all of SU is behind GMac in his quest to play in the big show, we do so with tempered expectations.

Speaking of SU Basketball, the final piece of the schedule has been added with Cleveland State (yes, it's an actual school) on Monday, Dec. 15. Cleveland State moved around some previously-scheduled games to make it happen. Hooray Vikings. As it is, the Orange will have a very busy mid-December:

Get your Christmas shopping done early, Arinze. You won't have much time right before.

And speaking of Arinze, we all remember what happened last time we let him near a backboard on Midnight 7pm Madness:

Well let's do it again. The madness returns to Manley Field House on Friday, Oct. 24. Sadly, it sounds like this is the last year they'll do it at Manley which is a shame. Totally expected, but a shame nonetheless. The Dome just doesn't lend itself to the kind of atmosphere you want on a night like this but, like I said, totally expected.

Oh and the event, which is supposed to mark the beginning of practice, will take place a week after practice starts. And Midnight Madness starts at 7pm. Let it never be said that SU isn't all about tradition...