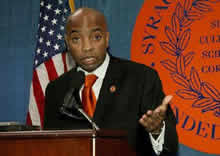 Of all the images that stood out for Orange fans during last week's Northwestern debacle, none was more jarring than the random shot of DOCTOR Daryl Gross strolling the sidelines during the game wielding multiple cellphones like he was a Wall Street powerbroker, seemingly uninterested in the outcome of the game itself. Who was he talking to and why did he need fourteen phones to accomplish his goal?

Get Gross Out has their own theory on who Gross was speaking with, which seems to hold up, but leave it to Donnie Webb to crack The DOC Gross Code and get to the bottom of things. Turns out, it's an even weirder circumstance than you thought...but not cause of the good DOC:

How would you feel to learn that Daryl was sitting in the press box at Ryan Field when ESPN2 plopped the footage of him speaking on his cell phone into the broadcast?

The image of Daryl talking into his cell phone was shot either before the game or early in the first quarter when he was on the field, but not shown to viewers until just before halftime when the game announcers discussed the fragile coaching situation with Greg Robinson.

Was it misleading by ESPN? Was it simply a production piece to illustrate a point, or did the timing leave Syracuse viewers thinking something else was going on with Gross?

Pam Ward, how could you? Everything I thought I knew about you is dead. ESPN2 is a den of lies!

Since The Gross Footage (which will go down in history with the Zapruder footage and the missing Watergate tape footage) was cued to the announcer's discussion of Robinson's coaching tenure and Gross' interest in maintaining stability, it looks like it was a case of some nifty editing and foresight on the part of the ESPN crew.

Misleading? Sure. Unheardof? Not really. Donnie also mentions that Gross only actually had one cellphone at the time, he was covering his ear with the other hand. It's believable, but something tells me DOC is the kind of guy that owns three cellphones, a blackberry and that iPhone that his assistant got for herself but he demanded he get to "borrow" until he sees fit to give it back to her.

As for who he was speaking with?

Gross said he was speaking on his cell phone with "donor friends" who were excited about the first game of the season.

I didn't realize Skip Holtz was an SU donor. Curious...