Share All sharing options for: Orange::44 Is An Absolute Magician 14.0

It's time for another round of Q&A between myself and Brian from Orange44. This week Brian talks about what it was like at the Penn State game, how he would handle the Greg Robinson situation and some early thoughts on the basketball schedule.

TNIAAM: I see you attend the game. Before we get to the carnage, what was it like on campus beforehand? 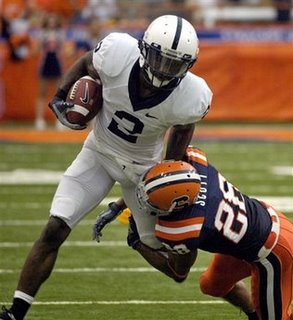 BRIAN: There were tons of people around. Looking around, I'd say it was a complete 50/50 split between and fans, which surprised me because I assumed it would be mostly . There was an excitement around, and some gentle jawing between the respective fans. It reminded me of when was great and winning at least eight games a year. There were quite a lot of tailgates, again from both PSU and SU fans, and it actually had a feel of a big time college football game, as I predicted. All in all, a fun day until traveling to the Dome, where it was the hottest I have ever felt it be. It was also packed. The announced attendance of 45,000 plus was accurate for once. The Dome was also very loud, which was nice to hear. Also, my usual section of 214 was absolutely packed which is not something I am used to.

TNIAAM: The game itself. Wa'happend?

BRIAN: I think that is what I would like to know. The team seemed to take a huge step back from the previous two games. In the three games has played, the Northwestern game seems to be the in terms of execution. Although they ran the ball well against , they managed to pull a circa last season and only earn about half a football field's worth in rush yards this time around. Coupled with the fact that could barely sustain any drives, and the many mistakes they made on offense, it made for a very long day.

And how could I forget the defense, absolutely shitting the bed. Granted that is an excellent team, but when any team earns a touchdown in three plays, driving 60 plus yards, there is a huge breakdown on defense. I do not know what is being said to these players behind the locker room doors, but it seems like they believed all they could do in this game was turn over and take it in the ass. I mean it was just brutal to see.

Yes, was the better team on the field, but did not even put up a legitimate fight. I don't think anyone was under the illusion that was going to win this game and pull off the upset, but people wanted to see a game with at least SOME exciting plays from . Nope. Sorry. Not from this team. It is a disgrace, and in my opinion the lowest point in Greg Robinson's career at , if that is possible.

TNIAAM: Can you walk away from the game with any silver linings?

BRIAN: In my opinion absolutely none that matter on the field. 's defense looks even worse to me than last year, which is shocking that it is possible. The offense has regressed from Week 1. I'm not sure how much lower they can go, but with these guys it has to be possible.

The only true silver lining is that seeing as they definitely did not win the game, Greggers has to be gone at the end of the year for certain now right? No magical upset win to point to and say that they should keep him on this time.

TNIAAM: When Daryl Gross and Nancy Cantor were introduced, did you boo? 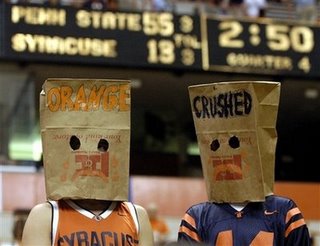 BRIAN: Did I actually boo? No, I was chatting with some friends about Dennis Quaid and the movie, which my friends and I enjoyed the night before. Did I want to boo? Absolutely. I have wanted to boo them for quite some time. I must admit, when DOCTOR Gross got to I was excited. I was working for the university at the time after I just graduated in May and got the chance to shake his hand and meet him face to face in the Carrier Dome during marching band practice. I got to chat with him about football, and going to bowl games and the like. He talked big and made us all optimistic in the post Coach P era. That quickly faded when we couldn't even beat South Florida, Rutgers, and anymore.


The same cannot be said for me believing in Nancy Cantor as Chancellor. I was always a Buzz Shaw fan. Having someone personable, approachable, and likeable at chancellor is huge for any student. She was none of those things right from the start. Oh yeah, and for some reason she hates free speech. The Axis of Evil shirts that are being sold are so correct it is not even funny. I have pledged to not donate any money to the university, my university, unless Nancy and Gross are not in charge anymore. They have taken a great university and made it a laughing stock in a lot of ways.

TNIAAM: Let's say you're in charge. Would you have fired Greg Robinson after the game? If not, what is your plan?

would then being an immediate search for a new head coach, thus beating most schools to great college coaching candidates. I think this would also be fair to Greg, letting him know he can be sure he will not be around next season, allowing him to look for other employment. This way, the fans would at least be somewhat satisfied, would still have a coach for the time being that we wouldn't be paying for if he is not coaching, Syracuse would have first crack at a new coach, and recruiting can get back on track faster as kids would know they would not be coming to play for Robinson.

I'm open to other suggestions for how to handle this situation immediately, but I figured after thinking about it this would probably be the best and most fair plan for all involved, including Greg. Greg being someone who probably shouldn't be getting such the benefit of the doubt.

TNIAAM: We've been so focused on the fiasco we haven't really stopped to think...could we lose to Northeastern this week?

BRIAN: The sad thing about this team is that they could regress even more, or just simply not believe they could beat them, and thus lose to a 1-AA team. That, my friends, would be a low point. While Northeastern will not even remotely come close to the teams they have already played, it is not about who on the field is better, but who is better right now. I'm sure Northeastern's coach has got them watching film of the Northwestern and games and saying "See, is not good. We can beat these guys." And frankly, he is probably right. I think if they played nine out of ten times, Northeastern would probably win once or twice, and the others would be closer than you think. That is the sad part about this team.

So could we lose to Northeastern? The answer is clearly yes. Do I think we will? No, I still think is not at the point where they will lose to a 1-AA school. Are we close to the edge where we would? You know it.

BRIAN: I am very displeased with the Big East slate, specifically the home Big East slate. There are only two home games on a Saturday? Seriously?! Thank god is one of them. That would be a travesty if neither UConn nor were at home on a weekend. The fact that we do not play UConn at home is depressing but we knew this would happen so at least it is not surprising. It still is not exactly friendly to the fans though.

Additionally, I am also displeased with not many away games on Saturday as well. I try to hit one away game a year, be it at , UConn, or something around here. Looks like I will be heading to Philly, as the Villanova away game is on a Saturday. I might blow off class to see the UConn game however. I guess it depends on if I know I already have a job upon graduation at that point.

I am very pleased with the non-conference games we have the pleasure of seeing. Strength of schedule is on the rise with the addition of at home (which we knew about) and on the road (which was a pleasant surprise). Either way, Doug Gottlieb should take it easy on us for a year. This team should be fun to watch and win a bunch of games, as depth is no longer an issue, so I am looking forward to a great season.