Mine Ears Bewitched Me With Whispers Of Xanadu

Share All sharing options for: Mine Ears Bewitched Me With Whispers Of Xanadu

When Pitt took the lead 27-24, I left the sports bar I was at and got in the car to drive home. I immediately turned on the radio broadcast and the announcers began chastising the many SU fans that begun to file out of the building. They couldn't understand why the fans would leave when the Orange were only down 3 and with plenty of time on the clock. Clearly, these guys don't watch a lot of Syracuse football. 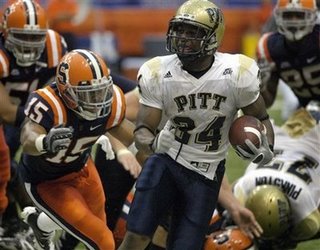 Otherwise, like us, they would just known. Every SU football fan knew in the pit of their stomach that once that lead had been relinquished it was never going to come back. That Pitt tacked on another TD to win the game 34-24 was irrelevant. The players fought hard and did what they could to take advantage of Pitt's sloppy first half, but you just knew sooner or later it wasn't going to be enough anymore. Time ran out before Louisville could complete their comeback last year...the clock wasn't quite as kind this time.

The big reason why? The Orange defensive frontline got manhandled, especially in the 2nd half. In the 4th quarter the Pitt running backs ran at will as whatever goodwill the D built up beforehand vanished. Pitt amassed 241 total rushing yards and 161 of those came in the 2nd half.

There was certainly no mistaking the evidence that the Orange blew the lead and the game. Just ask WR Donte Davis, he of the vampire analogy:

"It is a sense of like, we blew it," said Syracuse receiver Donte Davis, who had a 27-yard touchdown reception in the first quarter. "It felt like we had the game right there. We tasted their blood. When we see blood, we've got to attack. You know? We've got to finish them off. When you knock them down, keep them down. We let the beast get back up, man, and they beat us."

But you can't talk about a Syracuse collpase without taking about the architect behind it. Greg Robinson. Robinson has been taken to task for a couple decisions (or lack thereof) late in the game that only added to the outcome. Exhibit A:

The Orange led at the time, 14-3. It faced a fourth-and-one at the Pitt 38-yard line. To that point, the Syracuse offense had been averaging 6.8 yards per carry. The Panthers were reeling. And SU, with just three victories over schools from BCS conferences in its 39 games on Robinson's watch, had nothing to lose.

G-Rob's response? After failing to draw Pittsburgh offside with a prolonged count, he incurred a five-yard penalty and thereupon instructed Rob Long to punt. And then he sent his defense, ranked 114th in the nation, back onto the carpet where the Panthers' LeSean McCoy and LaRod Stephens-Howling - who'd eventually combine for 220 rushing yards - were waiting with bibs under their chins.

"...you play smart football. You punt it down there and you're supposed to stop them. I didn't see that situation - going for it at that time - was the right decision. That's the bottom line. I didn't need to do that at that time. I didn't believe that. You might disagree. You're allowed.

"When you're playing a game, you just play. We had the lead. We don't need to do anything silly and give them the ball at midfield. Hey, they're capable of stopping us right there, too. That's a coach's choice. A coach's decision, all the way."

It's truly mind-boggling that Greg can look at the state of his defense and then consider any decision that trusts them over the offense to be considered "smart football." Taking chances is for jerks, right? And what I love (read: hate) most about Greg is that even though he's defending his decision to the death, he then subtly admits it was a horrible move the next day:

But that was just a prelude to Greg's piece de resistance:

Syracuse had blown its 24-13 lead in the third quarter. The Panthers rallied to tie the game at 24 on a 44-yard field goal by Conor Lee and a 9-yard touchdown run by LaRod Stephens-Howling.

With Syracuse's offense desperate to answer, Robinson inserted true freshman tailback Antwon Bailey into the game. Bailey had yet to play this season through the first four games. Now, he was being asked to generate some ground game at a pivotal point in the game. Bailey rushed for 2 yards on his first carries and 3 on his second. On third down, there was confusion just getting the play called from the sidelines. Cameron Dantley barely got the snap in time to beat the play clock and was thrown for a 4-yard loss on what may or may not have been some type of quarterback draw. The end result - three and out. Pitt scored on the next possession with what proved to be the winning points on another Lee field goal.

"Doug had hurt himself, tweaked his ankle," Robinson said. "I felt we really didn't have him at full speed. Antwon is a guy that has been very impressive to us. The idea was, we're playing to try to win the football game, and when Curtis needed a blow, we needed to put him in. We were going to use Doug just because he's such a fine blocker for third down situations."

Well, I mean, I guess if Doug Hogue is hurt and Curtis Brinkley is tired and unable to play, than....what's that?....Curtis has something to say?

"I wanted to be in the game," he said, "but at the end of the day it's a coach's decision and the coach decided to put somebody else in. I wasn't hurt or nothing. I wasn't tired. I mean, my momentum carried me throughout the whole game. My adrenaline was rushing from the first play. I ain't get tired throughout any minute of the game."

Um...what the fuck? Greg, what was it exactly that brought you to this decision that had such an impact on the game? Why did you think Curtis Brinkley, who hadn't been on the field for about fifteen minutes, was tired?

Asked after the game on his thought, Curtis Brinkley summed it up:

"There's no way," Brinkley declared, "that Pittsburgh should have won that game."

See, even Curtis knows it. Stick a fork in Greg already, will ya? He's done.

Other news, notes and wrap-up: