Share All sharing options for: Living With A Wannstache

A week or so back I chatted with Chas over at PittBlather about the current state of Syracuse football and the Big East at-large. This week it's Chas' turn to come clean about Pittsburgh's early season struggles, what's going on with the Big East and where exactly a Pitt fans stands during a Penn State-Syracuse game. Have at it...

There is no defense to this. Sure BGSU is no , but they were picked by Phil Steele to win the MAC East. Just as I was on the verge of rationalizing this to some degree, they go out and get decimated by . A team that was 1-11 last year. So, that brought it back around.

All the restored goodwill Wannstedt had restored with the WVU win gone. I didn't necessarily buy into the momentum from that win carrying over. What I believed was that the talent was in place. Unfortunately, not the coaching.

It's frustrating because the fans had shown up for the game and really wanted to celebrate. They were ready to explode, and after Pitt got off to a 14-0 lead there was buzz. Then as Pitt started getting more conservative, and BGSU made actual adjustments in the game -- a concept that almost seems to offend Wannstedt -- the system is fine, there are no problems, all is well, just keep doing the same thing regardless.

The crowd just deflated, because everyone recognized what was going to happen. Even if they didn't want to believe it.

TNIAAM: Honestly, I wasn't sure how Pitt would respond against a better-than-you-think . You happy with the performance?

CHAS: Ehhhh. A win is a win, but it wasn't exactly encouraging. Yes, is better than their past history, but there is no reason that the Bulls should have led or stayed within a single score of Pitt for all but the final 4 minutes of the game.

The defense has not looked that impressive. Especially the line -- which was supposed to be the strength this year. Too many times, they could not get off the field.

I wasn't sure how that game would turn out going in. There was a surprisingly large local media contingent at a minor night game on the eve of the Steelers season opener. I can't help but think that was because there was a suspicion that they should be there in case it was necessary to write the obituary on the Wannstedt era -- not that he would have been fired that night for the loss, but the game that sealed his fate type thing.

TNIAAM: If we held Wannstedt down and shaved his mustache off...

a) would go undefeated the rest of the way.

b) would never win again while he remained coach

c) It would grow back within minutes to its full, bushy self so it's a fruitless exercise?

CHAS: Now, see, I want this to happen. I even called for it in the spring. Dennis Felton, the basketball coach, made that vow to the students in January if the Bulldogs won the SEC Tournament. He followed through on that promise.

I wanted Wannstedt to make a similar promise. I mean, he grew the thing because he liked the way it looked on Charles Bronson , and even Bronson would shave it at times.

Among your choices, though, let's rule out b). It's not like Pitt has been winning all that much with it. I'm guessing it would be c), since I need to see the MRI that shows how the Wannstache is directly tied to his brain and short-circuits his decision-making.

TNIAAM: Is the Big East sky falling or should we all just relax and see how the season unfolds before we worry about whether or not our conference champion's bowl berth will be downgraded to the GMAC Bowl?

CHAS: I take it the GMAC Bowl would feature the ACC Champ as well?

It's embarrassing to be sure, but I'm not panicking. The disappointing thing, is that the BE had actual expectations to be a lot better this year. WVU and USF both seemed to have top-10 potential. Pitt, , Cinci and even UConn all seemed to expected to at least make appearances in the top-25.

So it's more of a come-down for the Big East as opposed to the ACC which was , Wake and perhaps UNC with some expectations.

TNIAAM: is coming to this weekend, who does a Pitt fan root for in this situation?

Really, how much animosity is there between and Pitt with football? The record is dead even at 30-30-3. It's one of the longest played series for both teams, yet no big hatred. I think I pointed this out to Matt Glaude a couple years back that a lot of that stems from the fact that for the most part of the history, the teams see-sawed. One was average to good and the other sucked. It made for a lot of uninteresting and relatively meaningless games. Little in the way of bragging rights or geographic/recruiting/local importance.

Sure it's embarrassing for one side, and you want to win, but hatred? Just not there.

TNIAAM: What would the final record have to be for Wannstedt to be fired at season end? What record would get him an extension? 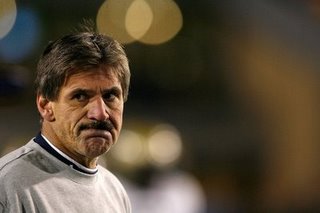 CHAS: 3-9 guarantees a firing. 4-8 and I'd say it's 60% chance he doesn't return. Anything better and he's not going anywhere. Seriously. Unlike your guy, Wannstedt is an alum, recruits real well and he brings in the money from the big donors. He is a fantastic schmoozer. The AD and Chancellor both love the guy. They will give him every chance beyond reason.

Anything at 7-5 or better and there will be another extension as the Athletic Department speaks of the program headed in the right direction. Yada, yada, yada.

Well if we can't go to Toronto, it might as well be the Panthers. Who knows, you may just get your chances at vengeance with Bowling Green whilst there. Thanks again to Chas and keep an eye on PittBlather as the SU-Pitt game approaches.