A Little Jersey-Talk Never Hurt Anybody

Share All sharing options for: A Little Jersey-Talk Never Hurt Anybody

The Big East is in turmoil right now and besides Syracuse there's probably no program feeling that pain more than Rutgers. I spoke with Jon over at the top-notch Rutgers blog Bleed Scarlet to get his thoughts on the season so far, the Greg Schiano Era and the future of Rutgers football.

TNIAAM: I know a fan has no right to talk, but, what the hell is going on with ???

BLEED SCARLET: Good question. That's what the fanbase is trying to figure out right now, as no one can really put the finger on why the team is playing so poorly. What is clear is that Mike Teel had the worst game of his career against , and that the special teams somehow took a step back from a miserable unit in 2007. What happened is probably that the team made a few mistakes that compounded and snowballed, and they lost confidence as both games progressed. 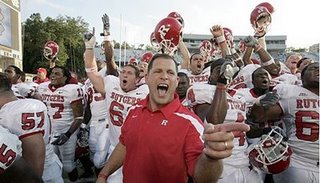 TNIAAM: Is the shine wearing off of Greg Schiano?

BLEED SCARLET: It should be. I've always thought his gameday coaching left a lot to be desired, so maybe other teams will stop being interested in him now and not drive his salary up even higher. On everything else though, Schiano is still everything that could be asked for from a coach, and he deserves all of the credit for making organizational changes that football needed. As a whole, he's good at his job and a good fit for the program.

TNIAAM: Are you worried about the whole stadium construction/Greg Schiano's contract issue? Do you think he'll leave if the right job () opens up?

BLEED SCARLET: The main reason there's been so much press about the issue is that the state of and are both in financial crises right now. I'm worried about where exactly the money will come from, but the athletic department has been good about not dumping off expenses on the rest of the school or taxpayers in the past. The stadium expansion still should happen, even if there will likely be several amenities cuts to drive the cost down. At the same time, a member of the university Board of Governors named George Zoffinger has been trying to get athletic director Bob Mulcahy fired by leaking information to the Star-Ledger. Two reports based on these - that Greg Schiano was receiving a secret salary of $250,000 off the books, and that the buyout in his contract would be voided if stadium expansion didn't happen - were false. In truth, Greg Schiano has a blanket $500,000 buyout, and he also has to repay a $500,000 interest free loan if he leaves before his contract expires.

Putting aside RU's performance this year, I'm not sure will be interested in Schiano. They already have a defensive coordinator named Tom Bradley who would be a good fit for the job, and is telling recruits that the next coach is on their staff. Yes, is a better program than , but I don't think that's the only criterion Schiano will use to make his decision. He's not Bobby Petrino. I know that Schiano is not a popular guy in circles, but fans look at him as an honest and fundamentally good man. Of course he could leave, but observers who think that Schiano would decide to leave for PSU in an instant if he had the opportunity aren't really familiar with the man or how he operates. He believes every word he says about , and deciding to leave would be an absolutely gut-wrenching decision for him.

Of course, if the school and athletic program stopped supporting him, it'd be a different story. However, to this point, Greg Schiano has arguably gotten everything he wanted. The team opened up its facility a few years ago, they're compensating him quite well, and he even let him build a house on a university nature preserve. If the school ultimately says 'no' this time, it would be a first.

TNIAAM: You've got @ Navy and then . Are you confident that the Knights can be 2-2?

BLEED SCARLET: Yeah. Of course, I was confident that they would bounce back against . Navy looks down this year, and usually beats them.

TNIAAM: If has a losing season this year, what does it all mean?

BLEED SCARLET: The Rivals forum would be even more unreadable, for starters. Of course, they'd probably lose a few recruits, and public perception of the program would drop, but one 4 or 5 win season is not going to mean all that much. Things could get uglier obviously if they finish any worse than that.

TNIAAM: I grew up in , which is 20 minutes outside of . So I remember how little everyone cared about as recently as the 90's and early 00's. It's crazy to me when I go home and see Rutgers gear in shop windows and flags on cars. What has it meant to you as a fan and do you see it lasting?

BLEED SCARLET: You have to remember that (former coach) Terry Shea was our version of Greg Robinson. Early 90s Rutgers was of course not as good as late 90s Syracuse, but the futility of that era was unprecedented even for Rutgers, and it's not really fair to judge the program by that era, just as Syracuse is not defined by GRob.

Middlesex and are of course the epicenter of RU support. I'm under no illusions - the Northeast just doesn't care all that much about college football, and a lot of the fans that do care already have teams that they support, and aren't just going to change allegiances overnight. What's good for football is that there are now kids growing up who have always seen the program as respectable, and the goal should be to go after their long-term support. Greg Schiano even had a book called Hello Scarlet Knight distributed to schools across the state. football is just like Wu-Tang; it's for the children.

The stadium currently holds 42,000, and it's expanding to 56,000. That's not The Big House. Sustainable fan support isn't going to come overnight, but I think that there's enough to support the expansion even if bandwagon fans find something else to worry about for the time being. Frankly, I won't be sad to see them go.

I'm a fan of the football team, but what it really means to me is as a metaphor for the university as a whole, which has arguably been mismanaged as bad as the athletic program over the years. The recent success of football shows that with more support and resources, can improve its lot and any lingering negative perceptions. No offense, but it's a major problem that New Jersey produces more quality college students than any other state, and most of them still leave to attend college. I want the football team to be a vehicle for getting more of the area behind . 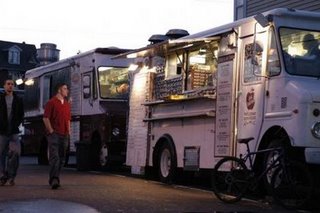 BLEED SCARLET: I usually get the falafel, is that bad? I would go for a Fat Darrell every semester after finals ended. I always thought that the Grease Trucks were more for tourists, and that has a lot of awesome dives, and some nice higher-end restaurants if anyone's into that sort of thing. (Ed. Note: The correct answer is…Fat )

TNIAAM: Gun to your head, Rutger's final record will be...

BLEED SCARLET: 6-6, maybe 7-5. A lot of people see the UConn game as a loss at this point, but I think it's a win if the ship is righted. Which is a very big if.

Thanks Jon. Keep an eye on Bleed Scarlet for all your Rutgers news and do check out his fantastic breakdown of all the legit coaching candidate for Syracuse.I'm sure we'll be in touch as the SU-Rutgers game draws closer.