The Kiffination Of Syracuse Inches Closer

Share All sharing options for: The Kiffination Of Syracuse Inches Closer

Earlier today DOCTOR Daryl Gross publicly displayed the noose with which he intends to hang Greg Robinson with. While that piece was chocked full of wondrous notes and quotes, one part kinda skimmed under the surface:

Gross laughed off speculation that he will hire Lane Kiffin, the Raiders coach rumored to be on his way out in Oakland. The two of them worked together at USC. 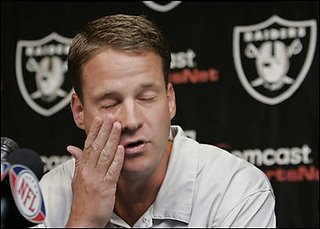 Did he chuckle? Guffaw? Laugh maniacally while twiddling his thumbs? What does that mean? Well leave it to the Axeman to set things straight. Axe spoke with Gross earlier today and got a juicy bit of info:

Gross told me this afternoon that "hypothetically speaking, Kiffin would be a candidate in any coaching search here if one were to take place and if he was available."

Kiffin, as it should be noted, is still the head coach of the Oakland Raiders. Of course, that's about as certain to end as the job at Syracuse is to open up.

As for the whole "Gross calling ESPN to publicly dump on his coach" thing, Axe adds...

The biggest thing in this whole story to me is that Gross called ESPN himself. This happens all the time with people in the public eye. Take it from me. It happens on almost a daily basis in my world. The thing is, at least in my experience, those who call to complain and/or dispute something said rarely go on the record about it.

Gross not only went on the record here, he did it to the worldwide leader in sports. Seems like a calculated move if you ask me.

Calculated indeed. But the question is, was he more concerned with putting Greg Robinson on official notice or was it to "set the record straight" about Daryl's own status as Syracuse A.D.?

(By the way, if you want to keep your finger on the pulse of KiffinFiredWatch, I suggest HasLaneKiffinBeenFired.com, which does exactly what you think it will.)