Down 30-10 and with 5:30 left in the 4th quarter, the Syracuse Orange were up against it. Stuck at the Northwestern 44, they had run out of chances and it was down to one last gasp. One last chance to ride the slim odds that were left and try everything in their power to score. After that, they could onside kick and hope for the best. Not good odds at all. But better than nothing.

Naturally, Syracuse punted. In doing so, they sent the smoke signal up for all to see. The signal removed all doubt that might have been nagging at the back of Orange fans' minds. It also alerted the rest of the nation and Syracuse's future opponents to what they can expect the Orange and head coach Greg Robinson to do when their backs are against the wall. 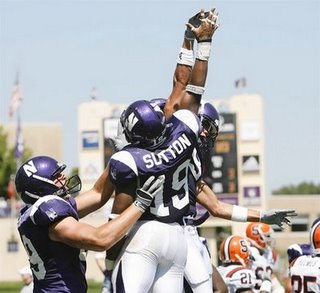 When the odds are against them and the times get toughest, they will quit.

In that one singular moment Greg Robinson solidified his legacy and the culture he created at Syracuse University. No sequence better explains everything that is horribly wrong with Syracuse football than this one. With nothing to lose, Greg Robinson would rather play it safe than put it all on the line. And that's why we're all in the state we're currently in.

I have no doubt that Greg Robinson is a passionate man in some aspects of his life. I don't even doubt that he's passionate about football. But as to where that passion is in how he coaches, I'm not sure. No one with any passion could have thrown in the towel like it, no matter what led up to this.

The truth is, well, there is no truth to Greg. Even now, check out his response as to why he punted instead of going for it on 4th down:

"I really thought that maybe ... we threw the incomplete pass, it was fourth-and-10 I believe, I said hey, you know what, maybe we can go down there and make something happen with the defense. Maybe in hindsight, I probably should have gone for it. I figured let the defense have a chance to see if they could, and they didn't. They didn't respond."

So let me get this straight...you want to rely on your defense, which has given up 30 points, and is so visibly tired that only a deluded, blind, brain-dead, headless buffoon couldn't notice, count on them to stop Northwestern and force their punter, who is currently having the game of his life, to kick the ball back to you where, in the best case scenario, you will get the ball back IN THE EXACT SAME SPOT YOU ARE IN NOW ONLY WITH TWO LESS MINUTES TO WORK WITH, and that is your strategy? And then you throw the defense under the bus to boot?

I really hope that's just bullshit, cause if its not, then holy shit you shouldn't be let within 500 feet of a football team ever again.

We have a lot of fun with his "Gregisms" here but really, what are they? What are his vague, non-committal statements? They are the bullshit jargon that spews from his mouth to ensure that nothing resembling the truth ever ventures out. Rather than give you a prediction, he deflects. Rather than come clean about what's not working, he makes up arbitrary claims that you can't challenge because they're unquantifiable. And that's not just how Greg talks, it's how he coaches as well. He coaches like a leader who doesn't actually know what the score is at any given time. He's told himself that everything's gonna be okay so many times that he doesn't realize how much is on the line with every game he loses. And as such, when he makes make-or-break decisions, he does them like a person just trying to do the right thing, rather than make the ultimate sacrifice necessary in order to win.

That play, and the game in general, confirmed our worst fears. When the Orange didn't run a full game during the Spring Game and we wondered if Greg was being coy, we know now he wasn't. When Mitch Browning and Greg would seemingly smirk when we asked them to delve into the offensive schemes because we thought they knew something we didn't, they really didn't either.

The is a runaway ship. The one person who has the opportunity to stop it, DOCTOR Daryl Gross, refuses to do so for his own personal ego. If Greg Robinson is the captain of the Titanic, Gross is most certainly the ship's owner, too hellbent on reaching glory on the maiden voyage to worry about any icebergs that might be out there. Truth is, we hit the iceberg miles back, the ship's already split in two and any star-crossed lovers who met while aboard the craft are already in the icy waters clinging to life.

If the Orange lose to Akron this weekend, which not one SU fan can honestly say they aren't worried about, the official process involved with finding the next head coach should begin. We've already wasted enough time and things look like they're only going to get worse. The sooner we find the solution, the sooner we can correct the problem.

The most sure-fire way you know the team doesn't command Robinson's respect is the fact that some of them have no problem commenting on the issue first-hand. Delone Carter, who in one play almost ended his resurrection and later, um, resurrected his resurrection. He also spoke for SU fans when asked by Bud Poliquin about the team's performance:

"I don't blame you for thinking like that," he said. "I don't blame you at all. Evidently, what we did today didn't work. We have to fix this, man. We need to get it figured out. We had too many mistakes. We can't start that again. What we need, basically, is more discipline.

"I'm not the coach, but some things need to be changed. We should be able to move the ball without any problems. Putting ourselves in the hole. Going offsides. Committing penalties. Cutting while being engaged. Stuff like that. I mean, we're not young anymore. We can't use that as an excuse now."

What do they say is the first sign of bad coaching? Lack of discipline, right? Uh-huh...

That last part is pretty telling as well. "We're not young anymore." Interesting, considering that's what Greg Robinson's mantra is going to be for the next ten weeks. It began here...

Yeah, we have some older players. But we've got a lot of kids, too, that are doing some things very well. But they had their moments yesterday. We've got to work our way through it and do it quickly."

Weird, cause I was pretty sure the time for talk was done. What's all this talk about young kids now? Which is it, Greg?

I've been stewing all weekend with this diatribe in my head and I'm glad it's finally out. We'll talk more details tomorrow and begin getting ready for Akron. In the meantime, we will be angry and we will bitter and we will be bothered. The funny thing is, when I imagine what Greg Robinson is up to, I imagine he's home watching Criminal Minds on CBS, enjoying a beer and blissfully at ease with life. Sure, he's bummed, but, you know, things will get better. And then I just angrier...