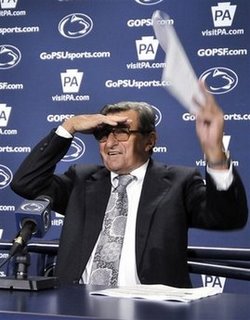 Syracuse has now played two teams that run the spread offense and they have been shredded on defense both times. It is clear that no matter what we do moving forward, we need to avoid teams that use the spread offense. That's a little hard to do when your schedule is set in stone, but maybe there's a way to pretend we thought Army was on the schedule this whole time and we totally flaked and we'll make it up to West Virginia next year but for now we have to play the Knights instead.

The Nittany Lions blew out their first two opponents by averaging 55.5 points. The un-vanilla offense, dubbed the Spread HD by assistant coach Jay Paterno, has made the classic blue and white uniforms seem splashy.

His son came up with the label before last year's Alamo Bowl, aiming to run the "next generation of the spread, the Spread HD," says Jay Paterno about a high-definition offense that balances a West Coast passing attack and NFL-style pass plays with the spread running game.

I know Jay Paterno (wonder how he got the job) is being credited as the architect but c'mon now, we all know JoePa is the real mastermind. You just know that Joe has his hands deep in this and he's responsible for everything...the formations, the plays and even the naming of it:

"I haven't had the slightest idea of what HD is," says head coach Joe Paterno, Jay's father, when asked about the label. "What is it supposed to mean?"