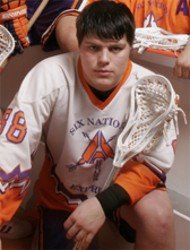 If you find yourself walking the Syracuse quad over the next few days and the sidewalks are laced with rose petals, don't think much of it. Actually, you should feel honored. You are walking in the footsteps of one Cody Jamieson.

Way back in July '07 I mentioned Jamieson, he who scored 122 goals en route to leading Onondaga Community College to it's 2nd straight CC National Championship while being named national junior college male athlete of the year, two-time first-team All-American and two-time title-game MVP, had decided to transfer to SU. Based on some credit issues, Jamieson made the decision to sit out this previous season so that he could get two full years of eligibility upon his arrival. The decision worked out for all parties as SU won the NCAA Title and Jamieson now arrives on campus as what would be the jewel of the #4 recruiting class in the nation.

And so, Jamieson has officially arrived. I'm not even talking figuratively...I mean literally. He's on campus. Rejoice, people!

Cody Jamieson has enrolled at Syracuse University, the highly-touted attack transfer from OCC told The Daily Orange this afternoon.

I had a chance to speak with Jamieson on the phone this afternoon. I sat in the Manley Fieldhouse parking lot, waiting for Greg Robinson’s weekly press conference to start. He sat in the Quad, waiting for this next class to start. He’s been taking classes since last Monday. He plans to study communications and rhetorical studies.

"Right now I’m at 11 credits — part-time," he said. "And hopefully within the week, or by next week definitely, hopefully I can pick up another couple classes and be full-time."

Technically, Jamieson is not officially an SU student and is still a "prospect" but let's not mince words...he's here, he's Orange, get used to it.

Not sold on Jamieson until you hear some first-hand feedback from those who have seen him play? Fine, how bout his OCC Head Coach Chuck Wilbur:

"One on one...he's almost impossible to stop."

Teeheehee...sorry Every Other College Lacrosse Program. You just FAILED.