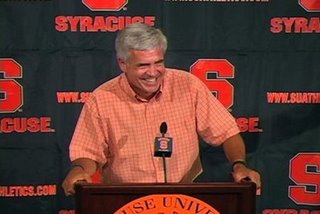 From his Tuesday press conference:

"They go beyond the structure of the offense. That's the thing that I see. They have players who go beyond the way things are designed. When you have those types of athletes, it makes life hard on people. I can show a number of plays, even in their bowl game or a number of their games last year, and I've seen this fall that people are in position to make plays, but are unable to make the plays because some of Penn State's athletes go beyond the design."

Beyond The Design, officially on the Gregism Pantheon Watch list. We only need two more seperate uses of it and it qualifies. (And why can't he just talk like a normal person and says "they're really athletic?" WHY?)

On how he sells his team on winning the game:

"You do it by going one play at a time. Just going out there and preparing properly mentally, physically and emotionally. On top of that, you have to go one play at a time and you have to find ways to create your own plays. On defense, we have to create turnovers and on offense, we have to find ways to control that football and put points on the board."

Could you script a more "coach-speak" answer than that? All you need is to add in a reference to Jesus and the use of 110% and it would have qualified as The Perfect Coach Quote. ESPN could have created a bit on SportsCenter about it and sold advertising, like to say Pontiac and it could be the Pontiac Perfect Coach Quote and Stu Scott could do a spoken word tribute to it while looking at you with one eye and looking out to the left somewhere with the other.