Hey Greg, good news! There's an article about you on the front page of WashingtonPost.com!

But I also have some bad news. There's an article about you on the front page of WashingtonPost.com.

Robinson, in his fourth year at the helm of a Syracuse program that has the third-lowest scoring average in division I-A since his arrival, faces the same challenge many coaches have over the years: continuing to coach his team while knowing that his firing is seemingly imminent.

The task requires coaches to fall back on the most elementary lesson they learned while rising through the ranks. The ability to compartmentalize is vital. Several former head coaches contacted for this story said they were able to acknowledge the public speculation on their career's demise and, at the same time, decline to accept it as reality. 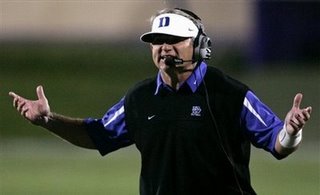 The article turns to the one man who kinda knows what Robinson is going through...former Duke head coach Ted Roof. Roof knows all to well what its like to coach with the knowledge that the hammer is going to drop.

"As a coach, you want to control the things you can control," said Ted Roof, who coached Duke to a 6-45 record from 2003 to 2007. "It's that bunker mentality -- look at the next day, the next practice, the next game. It's that singleness of purpose. Just keep marching."

In other words, you keep fightin' the fight cause the time for talk is over. A sentiment Greg Robinson would tend to agree with.