The Express Is The Greatest Movie Ever

Share All sharing options for: The Express Is The Greatest Movie Ever

Very cute news nuggets popping up this week in regards to The Express..

First off, congrats for the SU football team who actually get to see the film tonight. And only a week after the Dayton Flyers saw it. Score !

Oh and in case you didn't know, it's the greatest movie ever made:

A screening of the movie scheduled in New York City in early August was cancelled. Sometimes, that can mean anxiety about the quality of the picture. Not so said Roger Springfield of SU's department of athletics. He said the movie has tested exceptionally well. He said an initial test in February got scores of 98 and 99 out of 100. Universal was so skeptical, it tested it again, Springfield said, and the scores came back the same.

"It's one of the highest tested movies in Universal history," Springfield said

Little trick I learned when I worked in "the biz," EVERY movie is one of the highest tested movies in INSERT STUDIO history. Especially when you're asked that question within a month of the film's release.

Fingers crossed that the test audiences didn't hate the ending, causing some last second re-shoots so that the film now ends with Ernie Davis beating leukemia and joining forces with a penguin to fight crime on the mean streets of Detroit. Then again... 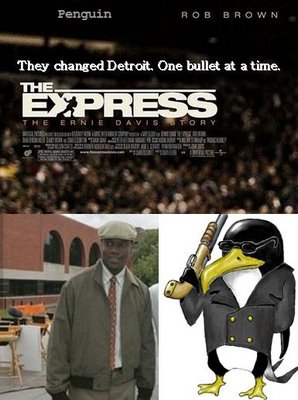 I think it goes without saying that Penguin gets top billing.