The Express Inspires SU Football Team Almost As Much As Dayton's

Share All sharing options for: The Express Inspires SU Football Team Almost As Much As Dayton's 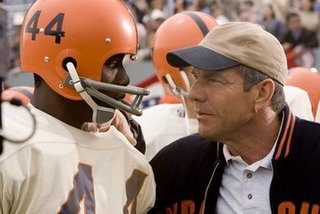 The SU Football team finally got to watch the major motion picture all about one of their own last night. Long after people from other football programs who had nothing to do with Ernie Davis' story saw the film and long after the opportunity to see the film before the first game of the season, the Orange may have actually gotten to see the film at the perfect time when its all said and done. Living in a world where no one has had a nice thing to say about them, their coach or their program in weeks, it's the perfect motivating tool necessary to prove to the world that they can beat a MAC team at home:

"Emotionally, I'm ready to go play out in the parking lot right now," said Syracuse senior wide receiver Bruce Williams. "We have to get this thing on a roll. Our tradition is so great, and to finally learn the story of Ernie Davis, it's a blessing. I feel like our team, that just gave us a boost."

"I was just floored, to some extent," said SU linebacker Jake Flaherty. "This is what we're a part of. I just got good vibes from everybody in there."

"You hear about the history over and over again, you get it pounded into you that there's a lot of tradition here," Shadle said. "That really brought it to life."

But who did the film touch most of all? Greg Robinson, the big softee. Probably in need of a good cry, Greggers was awash in emotions...and glad for the history lesson:

"I really didn't know the whole story," said Robinson, who looked stunned and admitted he got choked up. "I know how I feel. I know the team feels the same way. There it was, in living color."

In an AP article about the film, Robinson continues...

"It'll go beyond football games,'' Syracuse head coach Greg Robinson said. ``There are so many messages in that movie that I think we can all take from. I think it'll run throughout this country and a lot of other parts of this world for a long time.''

Jesus, alright, I'll go see it opening weekend. They should just change the tagline at this point to The Express...better than Jesus!

But what about the film itself, what's it like? How's the story play out? How accurate is it? Donnie Webb to the rescue (nothing too spoilery ahead, although if anything about this story is a spoiler to you, you probably don't get out much):

First of all Donnie, is The Express a biography?

The movie IS NOT a biography.

Okay then. What the hell is it then?

It is a movie, so be prepared with playing a little loose with facts. The score in the 1959 Penn State game is wrong. Why? Who knows. It's a movie. Why is John Brown's character called Jack Brinkley? Who knows. The movie team has been upfront with that premise all along. So don't freak out when you see SU logos that are a little too modern. All you need to know is this - the essential heart of Ernie's story is right there. You won't be disappointed.

There are computer generated images of Archbold Stadium and the iconic end zone archway. Former SU sports information director Larry Kimball said the image is pretty darn close to what it looked like...The Saltine Warrior lives. The mascot is in the movie. So is the campus statue...You will be inundated with images of SU football. It's crazy. From the uniforms and helmets - which are gorgeous and will transport you in time - to the varsity jacket worn by Dennis Quaid as Schwartzwalder to the team bus, duffle bags and sports coats with the SU logo on the chest pocket, it is dazzling. 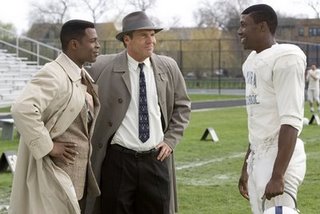 And we've seen some footage of opposing fans looking and sounding rather unsavory. Is this movie going to play in Texas?

Movie goers in West Virginia and Texas - brace yourself. It ain't pretty. Let's just say that both schools - at least by the movie's interpretation - had an issue or two with a black man playing football in their state. The N-word is hurled like sweat and lots of cheap shots from the players of those schools are delivered in the football scenes. West Virginia fans shower Davis and the Orange with bottles. Hey, some things never change (just kidding).

Just kidding indeed, I don't think West Virginia fans can still afford bottles. So seriously, is this movie really THAT good or is everyone just swept up in the emotions of Ernie Davis and Syracuse? Either way, I'm there opening weekend. My Syracuse Premiere Gala invite must've gotten lost in the mail so I'll just head on over to Chuck E. Cheese afterwards and have my own Gala event. So there.