Share All sharing options for: Explain Your Nittany Ways

What better way to get prepared for this weekend's Penn State match-up than by getting the straight scoop from one of their own? I traded Q's with Kevin over at Black Shoe Diaries and he provided some insight into the mind of Penn State fans on how they feel about the SU "rivalry," JoePa and who'll eventually replace him. (You can read my answers to his questions here) Have at it:

TNIAAM: I don't know about you but I would still be considered a newbie when it comes to being an SU fan. I didn't grow up with the Penn State rivalry but I always wondered why we didn't play you guys. What does it mean for you as a Penn State fan to renew this series and what does it mean to Penn State fans in general?

BSD: Well, like you suggest, it really depends on the generation. I personally don't have much invested in the rivalry, although Mike gave a great history lesson that makes me really want to feel the hate. If you guys can turn it around and our AD's can come to some agreement, this could turn into a decent rivalry. Some day.

What I really find myself thinking about, however, is how similar this story is to that of Pitt. There is a lot of division amongst our fanbase about whether that rivalry should be renewed, and it is interesting to see that it died for essentially the same reasons (Penn State wanting more home games, the opponent rejecting, the series ending). This game, and the "remember when" discussion that surrounds it, has a lot of Penn State fans revisiting the AD's decision to essentially end our eastern football ties. The proponents are tired of being nothing but anyone's second or third biggest game in the Big Ten, while the opponents wonder what the hell would be in it for us. I mean, look at what Pitt brings to the table: 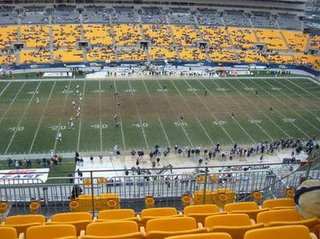 TNIAAM: Between injuries, arrests and suspensions, it's been a colorful year for the Penn State program. Is there a lack of institutional control going on here or is this all just a temporary glitch?

BSD: Colorful is a good word. I don't know that BSD has spent more time on any one thing over the past two months than this question. Outside The Lines ran a piece in which several people claimed that Paterno started recruiting character issue players in order to stop the flooding that was The Dark Years. I made a case as to why I don't buy that. There is another argument that the players simply don't respect/fear him anymore. That is a lot harder to prove either way. While some players like safety (and now captain) Anthony Scirrotto faced little in the way of punishment (involved in the original apartment fight), other players like Austin Scott and now Willie Harriott were straight up kicked off the team for relatively minor offenses (Scott was out past curfew during the week, and Harriott was caught driving with a suspended license). It's not like he stopped disciplining players, yet there is no denying the fact that these kids continue to do stupid things, sometimes mere weeks after a different nationally embarrassing story breaks about their teammates. Another theory is that kids these days just aren't the same. I find this incredibly naive. Kids have been getting in trouble for a long time, it isn't a creation of the 21st century. It's also worth noting (and RUTS details this thoroughly), that this is mostly a drinkin' and fightin' problem. Still a major problem, though.

This latest escapade was really a let down for me, personally. I thought we had moved past all this and were going to be able to focus on football. Yes this is probably a minor incident when looked at in a vacuum, but when taken in context it's one of the dumber run-ins we've seen. I'm going to dodge your question here because I simply don't know what to conclude. Something's gotta give, though.

TNIAAM: There's plenty of reasons for SU fans to shake in their boots but give me the three players we should fear the most.

BSD: Well I'm telling you right now that Evan Royster will probably have very big day tomorrow. I'd say "best game ever" but there is no way he plays in the third quarter. While the jury is still somewhat out on the actual power of this offense (I mean how good, really, is Oregon State?), Royster is the real deal and the offensive line might be one of the better units in the nation.

Other than that, look for Clark to have another good game and watch out on the defensive side of the ball for Josh Gaines. You've read enough bad news about the Penn State program, and so I'll suggest this read about Gaines; there are good kids in the lot also.

TNIAAM: What's the one thing Syracuse can do to give themselves any chance of winning this game?

BSD: Well I don't know if there is one thing that could get it done. Penn State's weakness, so far anyway, are probably most apparent on defensive side. If Syracuse can work to establish a running game by working on our very think defensive line, that could pay dividends in the fourth quarter. If the starters do have to go the full game, the Orange may be able to take advantage of a worn out defense.

What really makes this unlikely is that Penn State's number one strength, the run game, matches up nicely with Syracuse's absolutely awful run defense. This will not only put points on the board, but allow the defense to rest up in the event that the starters are forced to play more reps than originally planned. So with that, you have to work to force fumbles. Royster fumbled on the one yard line last week, that's the kind of thing Syracuse is going to need in order to keep Penn State from scoring. And it's going to have to happen multiple times.

BSD: Well, it sounds too low. As you guys know, 'Cuse has lost to some below average teams this year. With the way PSU handled Oregon State, I have to think the offense is going to be able to put up a lot of points. However, because I know that there is a lot I don't know about creating Vegas lines, I'm going to downgrade my actual opinion to "sounds right". I don't know what the linesmakers are thinking, but I can guess that the relatively low spread has something to do with three things:

-Penn State just doesn't play well on the road.
-Paterno is a notorious second half ball sitter (it's part of the reason we never have any experienced back-up QBs). Once the game is deemed "over", get ready for a whole lota second and third stringers running this familiar play set: run (up the middle), run (up the middle), pass (two yard bubble screen), punt...this doesn't usually lead to a lot of points.
-Syracuse can actually score points, and because our defensive depth is at CODE RED right now, the starters will be playing the bare minimum.

I'm don't foresee any of this leading to an actual close game, but I can see a situation where Penn State builds a 35 point lead, only to watch it trickle down to 21 because we start running the Victory Formation in the third quarter and end up playing a bunch of freshman on defense.

TNIAAM: With the world premiere of the film the day before the game, are you worried at all about "The Express factor?"

BSD: Before we talk about how I'm not worried about it, I just want to say I can't wait to see that movie. It's a really great story.

To answer your question, I'm not worried about "The Express Factor" any more than I'm worried Michigan State dominating the Big Ten because of the movie 300. (Ed. note: ORANGEMEN! THIS IS WHERE WE FIGHT!)

TNIAAM: Paterno...let him coach til he drops or lets wrap this up? And who do you want to see replace him, whenever that happens?

BSD: I think there is a middle ground in your first question, and that's where I stand. He deserves respect and should be allowed to go out on his own terms, unless his efforts to hold on are clearly hurting the program. The bigger issue for me is his desire to be heavily involved in naming his successor. This type of coaching change demands an objective look at all candidates, both inside and outside the program, and Paterno isn't capable of pulling that off without bias.

The three main candidates going into the season appeared to be Rutgers' Greg Schiano, Temple's Al Golden, and defensive coordinator Tom Bradley. The absolutely horrible start in New Jersey (I still don't quite understand how they were blown out by North Carolina) is hurting Schiano's stock big time, to the point where he may be off the list entirely if he keeps it up. Golden has a chance to make some noise in the MAC, and their performance against UConn was encouraging. He has ties to the program and could provide the change of pace and recruiting spark that the current staff lacks. Bradley has literally built Linebacker U and has lead one of the best and most consistent defenses in the nation for several years now; you would hate to give that up. He also has paid his dues and shown pure dedication to the Penn State cause.

For the record, I'm torn between Golden and Bradley, but am also open to any wildcard candidates that may arise during the process.

Thank you sir, and good luck to you and your 2nd stringers. May they get plenty of reps tomorrow. In the meantime, keep an eye on Black Shoe Diaries for more info today and especially for the very definitive SU-Penn State Rivalry rundown, Part I and Part II.