Don't Confuse Our Inept Coach With Our Ept Program

Share All sharing options for: Don't Confuse Our Inept Coach With Our Ept Program 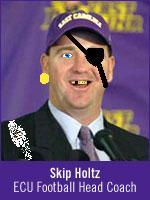 No, I don't think ept is an actual word. But it works. Sue me.

Via Donnie Webb, CBS Sportsline's Dennis Dodd has penned some weird thoughts on Skip Holtz and the possibility of him ending up at Syracuse next season.

"Holtz doesn't have an agent but he might have to hire one. Based on his 2-0 start, he will be able to have his pick of any open job in the country after this season. The early line: Washington is too far West. Holtz would like to stay in the South or the East Coach. The Syracuse opening would get him into a BCS conference but does he really want to go to Syracuse? The job is a coach killer.

"Syracuse opening? Come on, get real. Greg Robinson is now 7-30 at the Cuse after losing to Akron."

You can argue whether or not going to SU is a good move in the short term for Holtz but to call the Syracuse job a "coach killer" is silly and highlights Dodd's lack of knowledge on the subject. We've had three, count'm, three head coaches since 1981. Hardly the stuff of coaching graveyards.

For starters, let's compare that to the rest of the Big East over the same time period:

How bout other big-time programs? How do they stack up?

Alabama's had triple the amount of coaches as us, but we're the coach killer? Ahem...me thinks it's more likely Greg Robinson is actually a program killer.