Share All sharing options for: Cameron Dantley Is Doing Just Fine, Thank You 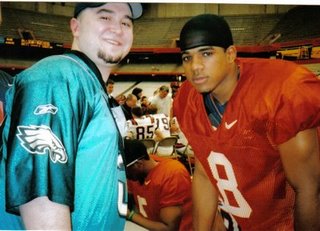 It's can't be stated enough, Cameron Dantley came to Syracuse as a walk-on. I don't care who you are, to become the starting quarterback for a 1-A program (yes, we still count) that way is pretty impressive. And you can bet Cam isn't ready to give up his starting spot now that he's got it.

Dantley said he never doubted he would start at Syracuse. Even though Andrew Robinson had established himself as the starting quarterback after the 2007 season, Dantley said he remained confident enough in his own abilities to win the job.

"It's the way I've always felt," Dantley said. "I take what I do very seriously. I always work hard just in case I am in that situation, so I'm not surprised when I get to that situation. This is the way I've been pushing myself ever since I was young."

Never doubted? I don't know, I'm pretty sure after the Louisville game and all pre-season he must have been thinking there's a good chance it'll never happen. Still, he was clearly ready to make it happen when he got the chance.

But Akron is Akron and Penn State is Penn State. As tough as his job might have been last week, he ain't seen nothing yet.

"You kind of get that reality like, gosh, I never thought I'd be playing Joe Paterno and Penn State and those historic uniforms. It's going to be very exciting."

I'd be more worried about the guys in those historic uniforms than anything. And don't say gosh. You remind us of Greg Robinson when you saw gosh. And you don't want that. As for how the son of a Hall of Fame basketball player ended up as quarterback for a football team? You can thank the blinding pressure that having a father who's successful in the NBA.

"I think maybe football took a little pressure off me because, my dad did play basketball...Football just kind of gave me that little window to jump out and be by myself and not worry about all the pressure that my dad had to do with basketball."