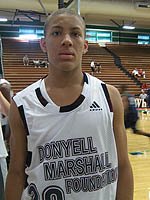 Brandon Triche, a 6-foot-4 senior point guard on the Syracuse-area Jamesville-DeWitt High School basketball team, was set to visit to visit the University of Connecticut this Friday and follow it up with an official visit to Georgetown next weekend. His rooms at the Storrs and D.C. Sheratons can officially be opened up as Triche committed to come play for SU next season.

It was a comeback season for Triche. He tore the anterior cruciate ligament in his left knee 11 games into his sophomore season. He was averaging 22 points, nine assists and seven rebounds at the time of the injury. Despite playing only 11 games, he still earned second-team all-state honors in Class A. 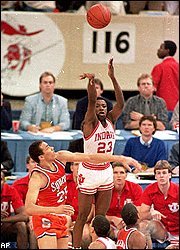 Um, I'm sorry, he's recovering from ACL surgery? Don't we already have enough of those? Then again, I guess it's a good thing, it's like he got it out of the way early so he doesn't have to tear it at SU.

Triche is the 2nd player to join the SU squad this week who is also a legacy. Walk-on Kevin Drew is the son of former SU player Bill Drew while Triche's uncle, Howard Triche, played at SU from 1983 to 1987. You may remember him as the unfortunate fellow trying to block Keith Smart's shot in the '87 National Championship game while wearing short shorts. (For the record, Brandon says the relationship had nothing to do with his coming to SU)

There's one last note in the article that was just awesome. For those who are worried about whether or not Mike Hopkins is putting in the work necessary to one-day take over the SU program, I give you this...

So remember when you're mother told you as a child not to talk to strangers if you're by yourself? Well maybe it should be amended to "unless he identifies himself as an assistant coach for a Division 1 basketball program."

Bud Poliquin chimes in with his thought on Triche, and notes that sooner or later, depending on how long Jonny Flynn sticks around, young Brandon is going to be called on to do good things.