Here's what's great about Greg Robinson's "If It Ain't Fixed, Why Fix It" manifesto with the Syracuse backfield. The longer he keeps things in limbo and the longer he strings these guys out into worrying over whether or not they're the starter or they're getting 3 reps/game during garbage time (which begins in the 3rd quarter usually), the more cracks appear in their fragile psyches and the less confident they become.

No one looks or sounds too happy. There is one football and one spot in the Syracuse University backfield for one tailback.

Senior Curtis Brinkley, sophomore Doug Hogue and sophomore Delone Carter all want the job and all the carries they can get. But after the carries and playing time were split up among the three in a 30-10 loss at Northwestern, there seemed to be some unhappy campers.

Except for one person head coach Greg Robinson. 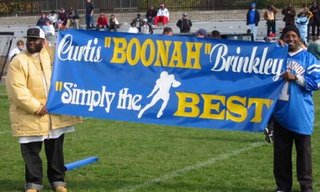 As long as Greg's happy with the way things are going, that's all that matters.

Yes, the Orange had a really nice rushing game but maybe it's time to inject a little bit of reality. It wasn't THAT great. 30 total carries for 122 yards. I mean, there's probably 20 running backs around the country who did better than that by themselves last weekend. In the annals of great team rushing performances, I would hardly say, as Greg has, that things are fixed.

Oh, and if anyone is going to crack first, it's probably going to be the assumed #1 HB Curtis Brinkley. Great:

"Obviously, in a perfect world, it would be this person is a starter and we're going to play him until he gets tired," Brinkley said. "Honestly, I really don't even care no more, to be honest with you. It's out of my hands."

"It's frustrating, to be honest with you," Brinkley said. "I can't deal . . . it's not my say. I have to have tunnel vision. When I go out to practice, I have to focus on me and what I've got to do make myself better. Whatever happens, happens."

The entire process won't be complete until we've broken Brinkley's spirit and turned him into a shell of a human being.

One thing you do get out of the article is that Brinkley seems to be all doom and gloom but Delone Carter is Mr. Positivity A-100. Obviously, what happens on the field is what matters most but there's something to be said for the difference in the way their mindsets are working.

Oh and no one cares what Doug Hogue thinks.