Andrew Robinson Will Have His Vengeance, In This Life Or The Next

Share All sharing options for: Andrew Robinson Will Have His Vengeance, In This Life Or The Next

Andrew Robinson didn't come to Syracuse to be second-string quarterback. I'm serious, listen to the guy:

"I didn't come here to be second-string quarterback."

You can imagine it was a bit of a shock when Robinson was demoted after a spring camp where there seemed to be no question of his lock on the starting job, the same one he held down almost all of last season. It was certainly a bit of a shock to SU fans. Greggers smoothed things out when he discussed it publicly, saying Andrew was disappointed but understood. Now, we get 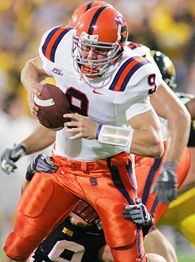 "It wasn't a complete shock, but I think I didn't expect to come in at that moment in time."

"I haven't been in a situation like this, ever, I don't think. It's a thing where I have to keep to my core values which are leadership and hard work - and try to keep improving and do what I have to do to get back on the field."

Robinson blames a "a weight transfer issue" as the reason he's had mechanical problems all season. Funny, I think Pat Shadle used to use the same excuse.