As usual, I'm late to the game so rather than regurgitate, I'll just point you in the right direction.

The Axeman lets DOCTOR Gross know it's totally okay if he wants to shuffle loose Greg Robinson now instead of at the end of the season:

The fear Gross has is that if you fire the coach now it signals chaos in the program.

What do you really have to lose letting Mitch Browning run the show the rest of the year on an interim basis? You aren't going to find your permanent head coach until after the season anyway. Gross likes Browning a lot. He has told me as much several times in chats we have had on the radio and elsewhere. I'm sure he has confidence in his ability to run the team for 9-10 games.

Why not do it after the Penn State game so you can get Mitch a win in his first game with Northeastern? I mean, better to move forward with some positivity rather than let that win be wasted.

The Daily Orange Sports Blog was glad to see Robinson actually become, well, human. Even if it's too little, too late:

Robinson showed a bit of his human side. For once, he wasn’t the unflappable, eternal optimist. He talked about how he hadn’t slept much since the contest, and even admitted he can’t help but notice the amount of Orange supporters calling for his head.

Bud Poliquin thinks its not a matter of if but a matter of when now for Greg Robinson. Poliquin takes a shot at the "faceless masses" calling for Robinson's dismissal which is weird cause he's insulting the people he agrees with:

Almost certainly, it won't be made soon. As in, today. Or this week. Or this month. And if that disappoints the folks who contribute to firerobinson.wordpress.com and those who dial up the local radio stations with their anti-Robinson rants and those who author all of those nameless e-mails calling for the man's dismissal . . . well, they'll have to settle for drumming their fingers on tables across Central New York and beyond.

Only reporters can have legitimate opinions, people. Everyone else is a jerk.

Speaking of Bud, please do at least check out of the beginning of his SU-Akron wrap-up video "live from Touchdown Town." I absolutely love the "Oh hey, I didn't see you there while I was studying my copious notes" look on his face when he starts up:

Donnie Webb got an email from former Orange offensive tackle and captain Mark Baniewicz. Although he's a bit of a Coach P apologist, he makes it known that the former players are just as unsatisfied as everyone else:

I have met our Athletic Director and Head Coach on a couple of occasions. They both possess a lot of enthusiasm and passion, which I admire and appreciate. They both share a desire to see Syracuse football succeed. They made it a point to express to me that Syracuse football is headed in the right direction. I believed them. Unfortunately, the progress that we have all been anticipating simply has not materialized. I am convinced that Syracuse football is not headed in the right direction. Change was not necessary when the decision was made to fire Paul Pasqualoni. Change is needed now.

That's what they do, Mark. They suck you in with the enthusiasm and blindside you with the stunning failure.

Donnie also mentions in a "I'm not sayin', I'm just sayin'" kind of way that Greg Robinson has resigned from a football position before. Just sayin'.

The D.O.'s John Clayton says the Orange have hit a new low, if that was even possible:

Because this was rock bottom. The lowest of the low. Certainly there have been plenty of nadirs during these last three-plus seasons. Plenty of times when it looked like things couldn't any worse for Greg Robinson and Syracuse football.

But they did Saturday. Syracuse wasn't just beaten by Akron. It was outclassed. The Zips were faster, more efficient and better-coached. By the Vegas books this was an upset, but the evidence Saturday intimated Akron was simply the better team.

David Resnick and Tim Schwartz are Talkin' Smack about the SU loss and making some noise on the Syracuse.com. 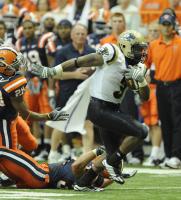 The Orange Squeeze wonders why DOCTOR Gross hasn't even so much as made a statement yet about the state of the program or Robinson's tenure.

There is just one thing I'd like to ask Athletic Director Dr. Daryl Gross after watching Akron beat Syracuse. Do you still think keeping this head coach of yours was a good move? I mean, this is getting worse and worse by the week and yet there is nothing coming from your office. This is your man, your find, your salvation to the horrible job that coach Pasqualoni was doing. I mean, with all due respect to anyone that might get offended here, but losing to a team like Akron would have meant the fan base going nuts against the old coach.

I'm sure the idea of publicly acknowledging the stink on Syracuse's sidelines the week of the Express premiere is out of the question, but still...show a little backbone.

If you want to gouge your eyes out after the latest SU loss, The Sport Hump has just the photo to put you over the edge. It's SFW but not exactly safe for your soul.

Nick's 2 Cents is looking for a few volunteers to break into Greg's house and pack it up for him. Which would actually save the Robinson's a ton in moving expenses. Way to be helpful, Nick!

Get Gross Out has penned an open letter to DOCTOR Gross to fire Greg Robinson ASAP. As in right now. As in today. As in five seconds ago:

With the removal of Greg Robinson now rather than following an embarrassing defeat to Penn State, you will show a disaffected fan base that you are truly committed to the future of Syracuse Football. By making this statement now, you will show Syracuse Alumni, fans, players and critics that the culture of losing that Greg Robinson has perpetuated will not be tolerable at Syracuse University. The appointment of Mitch Browning, now, on an interim basis allows for the healing and an extensive search for the next head coach to begin. It is our belief that this must happen to ensure that Syracuse returns to its traditional place as a Northeastern and National powerhouse.

Three Idiots channel Bruce Springsteen to tell the story of Syracuse football. My Carrier Dome is in ruins...