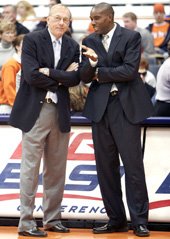 On Sunday, Nov. 9, Syracuse will face Indiana-Pennsylvania. Joe Lombardi, a former Pittsburgh assistant, is the coach at Indiana (Pa.). Game time is 2 p.m.

Okay, it's just pre-season games, no big deal. I don't know what's worse, that I've lived in Los Angeles for six years and never heard of CS-LA (excuse me, CSULA) or that those poor guys are going to have to travel all that way to lose by 40. It's a learning experience...I guess.

Oh and Dick Vitale thinks we're good, but not that good. Lucky for us, he's Dick Vitale and his opinion is more useless than Pam Ward's. But he's such an ambassador for the game! I can't wait to see what wacky wig he wears next.