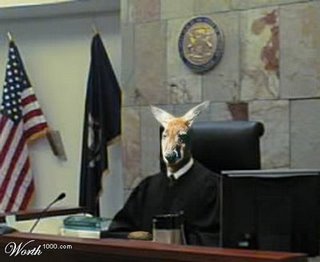 You're accused of sexually-assaulting a woman. You have already been cleared of all charges in a government court room by a jury of your peers. Still, you now have to stand in front of a panel of strangers who will not take that legal decision into account and will determine your fate based on not only the words of your accuser but on yours as well. You will not be allowed to have a lawyer stand next to you and advise you on legal issues or your rights. If you don't testify, it's practically an admission of guilt, so you have no choice. If you want your accuser cross examined, you have to do it yourself.

Question...where are you? Thailand? Russia? China?

Nope, you're just at Syracuse University.

Despite the fact that they were cleared of any wrongdoing by a grand jury in a United States court house, Jonny Flynn, Scoop Jardine and Rick Jackson's fates have yet to be truly decided. That won't happen until after they stand in front of SU's Judicial Hearing Board to plead their case.

SU's Judicial Hearing Board is part of a system that looks nothing like the courts most of us know: No lawyers represent the defendants.

Jonny Flynn, Antonio "Scoop" Jardine and Rick Jackson will be before the board on charges they sexually assaulted a female student on two occasions last fall.

The three, freshmen last year, will have their case heard by a three-member panel of faculty and administrators. A fourth male, who was not brought before the grand jury because the woman said their relationship was consensual, will also answer charges during that hearing.

In a damning article by Marnie Eisenstadt and Nancy Cole, the SU Judicial process is basically revealed as a highly unethical and disturbing system for determining guilt and punishment. A system that many lawyers and two state Supreme Court justices are speaking out against.

All four defendants (the three basketball players and the mysterious fourth student) will have their case heard at the same time. Their lawyers, who are present and able to whisper to their clients but cannot stand or sit next to them, will be sitting in silent protest as none of them seem to feel their clients will get a fair "trial."

Oh and if the accused want their accuser to answer questions about the alleged attack...they have to ask them themselves. How's that for unnecessarily awkward? Even then, the process is murky at best. You let the board know what your questions are and they decide which ones are ultimately asked. Scary.

James Meggesto, who represented various students in front of the board, basically puts it in perspective that this board is ridiculously un-American:

"There's no comparison," Meggesto said. "It turns the system almost inside out where the accused has to convince the university that they are not guilty."

Jonny Flynn's lawyer has already said that if the board punishes him, they will appeal the decision in an actual court.

We'll know the outcome soon enough (or maybe we won't). Fingers crossed on this one. And maybe this is exactly the kind of case needed to bring attention to the...unique...state of the Judicial Board and the power it wields.