Share All sharing options for: Orange::44 Is An Absolute Magician, Vol. 2, Issue 1

As Celine Dion once said, a new day has begun. And with it, comes the return of the Q&A War between I and Brian Harrison of Orange44. Let the battle re-commence!

TNIAAM: Welcome back, where the hell have you been?

BRIAN: Thanks Sean. Over the summer I headed back home for three months in Horseheads, New York to work at the Chemung County Public Advocates Office as a public defender. I handled about 2/3 family law cases (visitation, custody, and neglect) and 1/3 cases from a local village court. Needless to say, I was working full time, plus court two times a week in the evenings so I was fairly busy. It was nice to really dive in something that was very satisfying professionally and educationally and so I was just focused on that for the summer. I give you a lot of credit for having the full time job and blogging as much as you do. It is a hard business. Now that I'm back at school, have a little more time in the evenings, and the Syracuse sports seasons are starting up again, I'm ready to dive back in.

TNIAAM: What's the best thing you've seen out of training camp so far?

BRIAN: The simple fact that no one significant to the team has broken or torn anything yet. Of course, there are still a few days before the season actually starts so I suppose there's time. As everyone knows, Delone Carter dislocated his hip ending his season before it began, leaving us with a shaky running game. Then when Curtis Brinkley went down a few games into the season, that left us with a whole lot of not much in terms of running the ball. While that certainly was not the reason we only won two games, it certainly did not help. I'm hoping the teams ACL's have enough want-to to not tear for at least a few games in.

TNIAAM: What's the worst thing you've seen out of training camp so far?

BRIAN: Honestly, it is hard to say because Syracuse is so restrictive on the media when it comes to actually showing practices and the like. Everything is filtered and closely held. I think probably the worst thing I've seen is the fact that the football team will not view "The Express" at the premier or are having a special screening done like Kansas and VaTech. I mean, are they serious?! This is a movie about a Syracuse football player overcoming adversity and you are actually ON the Syracuse football team and you can't watch it? Really? Really DOCTOR Gross?! Really (read ala Seth & Amy on SNL's Weekend Update)? I mean that is some shameful stuff.

TNIAAM: Which untested or unproven players do you think will make "the leap"?

BRIAN: It is painfully obvious that the offensive line needs to improve for this team to do better on offense. In that vein, Ryan Durand looks poised to make a difference on the line this season. I have a feeling if any sacks will happen this year, they will come from the opposite side of the line. He is an All-American candidate and looks to help improve on the unit that needs the most improvement.

Other than that, in my mind Delone Carter is still not really proven. He missed all of last season and played moderately the year before that. Therefore, as unproven, if he gets help from the offensive line he should make a big impact on the offense. With the run, comes a passing game, and hey, we might actually be able to sustain some drives and score some points. More points = wins = less crying children on Orange::44.

TNIAAM: As the first game of the season gets closer, any early predictions for Northwestern?

BRIAN: I'm going to be a little bold and pick the unsafe bet. I think 'Cuse will win by four points. I think with a new offensive scheme, as well as the running component that we did not have the previous year, they should surprise Northwestern. It is not like they can really study film from last season that would help them prepare for the game. Syracuse should be able to move on the defense of Northwestern, at least save any in game adjustments that the Wildcat defense can make to stop the new Syracuse attack. I just hope I am not horrifically wrong. 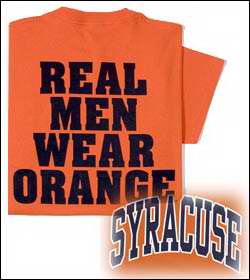 TNIAAM: If there's one piece of Syracuse-related merchandise the fan-in-the-know needs to have for this season, what is it?

BRIAN: I think you have to say it is a brand new jersey. Although they team probably will not wear them, the new orange "44" jerseys look pretty good. While I bought a new away jersey in 2005, I may have to make a brand new jersey purchase. Either that, or I will start wearing my old McNabb era "44" jersey. You know, when we won a lot of games and went to a bowl.

Other than that, just strap on your patented "Booze Shoes" for tailgate fun. Homecoming is the Northeastern game as well all know and nothing says "amazing tailgate" like a 3:30pm start. Speaking of which, when are you finally going to come back east and catch a game?

Alas, not anytime soon it seems. Chug a warm Pabst at 11am for me.