Only 97 Steps From The Top

Share All sharing options for: Only 97 Steps From The Top

Some may accuse me of being a tad negative about Syracuse sports, but what can I do? I'm just as Syracuse sports made me. Don't believe me? Just ask Patrick Stevens of the Washington Times:

A short history of Syracuse athletics over the last five years, viewed through the prism of the school's three major occupants of the Carrier Dome:

2003-Jim Boeheim's basketball team wins its elusive national title with more than a little help from Carmelo Anthony; John Desko's lacrosse program reaches the final four as it usually does; the football program goes 6-6 and misses a bowl invitation for the third time in four years; Syracuse flirts with joining the ACC, but the league ultimately takes Miami and Virginia Tech and, later, Boston College.

2004-Basketball tosses up a 23-8 and a regional semifinal appearance; Lacrosse wins its ninth national title in 22 years; Athletic director Jake Crouthamel announces he'll retire the next year; Daryl Gross is hired as Crouthamel's replacement; Football goes 6-6 and is demolished in the Champs Sports Bowl; Football coach Paul Pasqualoni is ousted after 14 years and the Gross-led search turns up Texas co-defensive coordinator Greg Robinson. 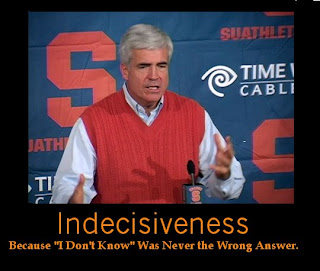 2005-Basketball produces a 27-7 season, wins the Big East tournament and loses to Vermont in the first round of the NCAA tournament; Lacrosse misses the final four for the first time since 1982; The Robinson Era debuts with a 1-10 start.

2006-Gerry McNamara leads the basketball team off the bubble and to its second straight Big East tournament title ... the Orange then lose to Texas A&M in the first round of the NCAA tournament; Lacrosse rebounds from a 1-4 start to reach the final four; Football goes 4-8 but doesn't look particularly good doing it.

2007-Boeheim is aghast when his team goes 10-6 in the Big East but is left out of the NCAA tournament, a punishment perhaps for not leaving the Empire State until Jan. 7; The lacrosse team stumbles through its first losing season since 1975; Football's win total is halved from four to two.

Finally, some good news for Syracuse after four years of diminishing returns. But guess what? Football won't do its part this fall. The Orange will occupy the cellar of the Big East, and Gross will have every reason to jettison Robinson. But he didn't last year despite a 7-28 record over three seasons.

That has to create a little fretfulness among 'Cuse supporters, who could make a case they are the most forlorn fanbase at a BCS conference school over the last four years. They don't need fretfulness. They need wins. Just don't expect them at the Dome this fall.

Hey, I'm just the messenger. By the way, that was a very roundabout way of saying the Orange are the #98 team in all of college football, just ahead of Toledo.