Of Injuries, Position Battles And FanFests To Come

Share All sharing options for: Of Injuries, Position Battles And FanFests To Come 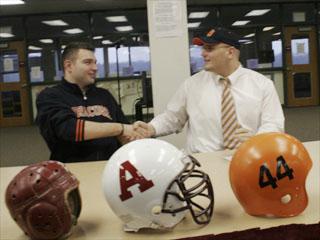 OL and menace to the lobster realm Ryan Durand sprained his ankle on Saturday. Nothing major, he's back on the field today. But the beneficiary of Durand's short disappearance...freshman Nick Lepak (right), whose been taking plenty of snaps with the first-stringers.

Last week we touched on the battle for #3 at the QB position. Coach Robinson confirmed that Cam Dantley was #2 on the depth chart (duh) but that the battle was not over between Catalina and Legree to see who would take over for the Orange in Week 5 after Andrew Robinson and Dantley are both sidelined after 37 sacks each. Catalina, not one to sit idly by, is trying to get some experience on the punting unit. A quarterback trying to block punts? It's unusual but it takes more than unusual to faze Greg Robinson:

"It's unusual. But you know what? I like his attitude. He wants in. That's a good thing."

Sunday was a tad uneventful but Donnie Webb warns us to keep an eye on freshman corner back Dorian Graham. Following in the footsteps of starting CB Mike Holmes, he could very well be the next, um, Mike Holmes.

It's Monday and that means tonight is FanFest! SU already has the perfect sign set up to greet fans when they arrive and make them feel like this event is all about community and comraderie between the players and the people:

The big news out of morning practice was the apparent mean streak the offensive line has been showing in practice so far. They're a much meaner group than recent years, a welcome change by all that has led to some colorful exchanges.

"Treat 'em like (blank)," said Browning. "Make sure that defensive lineman knows his (butt) is blocked and dominated."

Now, Donnie had to bleep some of the language in there but if I had to take a stab at what was being said, this would be my assumption:

"Treat 'em like a tender mother, cradling her child in the velvety softness of her bosom," said Browning. "Make sure that defensive lineman knows his leatherbound copy of Ethan Frome is blocked and dominated."

That Mitch, such a softy really.