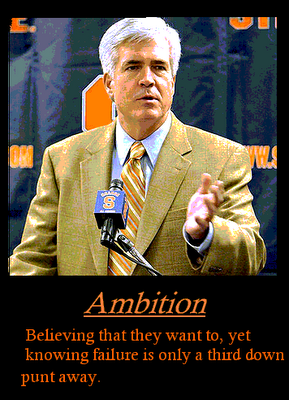 Oh my goodness, so much media day coverage, where does one begin? Gotta talk about Greg Robinson's ill-fated attempt to deflect attention from himself onto his players at the beginning of his press conference. When it's all said and done, they're (and by they're, I mean me) going to point to this as one of those times Greg just didn't seem like he understood what was being asked of him as a million-dollar-earning head coach.

A good man, Greg is. A fellow who inspires people to cross fingers on his behalf. But his earnest declaration, the one submitted on Monday as the Orange officially began its summer camp on the grounds outside Manley Field House, should have come with a laugh track.

"This is not about me," Robinson announced, unprompted, as he sat in a makeshift tent on a gray media day. "It is not about me. This is about a team getting ready for a football season.

...Anything else, though, would be studying the wallpaper while the house burned down because this 2008 campaign is absolutely about Robinson, the head coach who is beginning his fourth year at the wheel. That he'll lead the Orange onto the field at Northwestern on Aug. 30 with a career record of 7-28, and with a contract that all but ticks, unequivocally makes it so.

And so, Greg now has two pieces of ammo ready to go for any and all negative questions that come his way this season.

Good luck with him all season, Syracuse reporters. Should be fun.

In other Media Day news...

Averin Collier isn't interested in your red shirts, he would much prefer a starting position...Democrat & Chronicle

Don't tell that to Delone Carter and Curtis Brinkley...Donnie Webb

That Offensive Line is looking slim, thanks to Mitch et. al...Dave Rahme

So does the Daily Orange...D.O. Sports Blog