Jim Boeheim Judges All From Atop The Great Wall

Share All sharing options for: Jim Boeheim Judges All From Atop The Great Wall 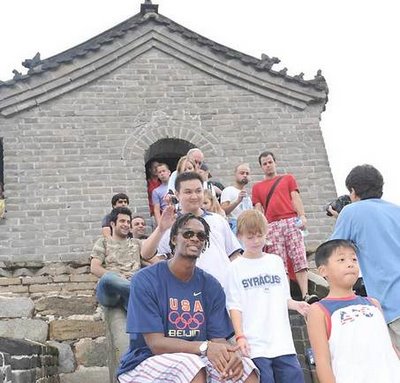 Only a Syracuse fan could look at this photo and find Chris Bosh to be the #5 most noteworthy thing about it. See that golden dome making it's way down the stairs back there? Yep, that's Jimmy B. And there's his lovely wife right in front of him (I know those bangs anywhere...). And is that one of the Boeheim brood in the Cuse shirt next to Bosh?

I just love this article about the trip which notes "Among those making the trip to the historic landmark were Bosh, Tayshaun Prince, coach Mike Krzyzewski, assistant coach Jim Boeheim, along with family and friends." Kobe, LeBron and Carmelo had better things to do? Did they find out there wasn't a California Pizza Kitchen nearby and decided against it?

While we await the next installment of the Jim Boeheim China Chronicles, we can at keep ourselves busy listening to Jim talking about the next best thing...completely unrelated topics.

First, Jim chimes in on the current state of Syracuse football and encourages us all to take a step back:

"I think that everybody has pretty much written this team off. But sometimes things don't turn out that way. And I hope that's the case this year. Sports have a lot of surprises and I hope this team is going to surprise some people.

"I think there's a very negative outlook from everybody, and maybe based on what's happened lately, that's to be expected. But sometimes there are surprises in sports. And this team might be one of them."

Fair enough. The man won a National Title, the least we can do is humor him.

Next...apparently the Denver Nuggets, they who employ Carmelo Anthony, have asked for Jim's opinion on the current state of their operations. No wait, they didn't ask. But when has that ever stopped Jimmy?

"I don't know how you can let Marcus Camby go," Boeheim said. "He was like the heart and soul of that team when it comes to defense, protecting the basket and rebounding. It's tough to replace him."

"Without Camby, I don't see any way that they can possibly win because he was a key guy for them," Boeheim told me the other day. "Believe me, I watched at least 70 games they played, maybe more. And he was a key guy."

"I'm sure it didn't make any sense to anybody from a basketball point of view,"

"From a financial viewpoint, I guess Wal-Mart's stock is down a little bit or something. Must be down a couple hundred million dollars, I don't know. I didn't know money was a problem in that family."

"I think it was a good thought [to bring in Allen Iverson]. I think Allen is a tremendous offensive player, but he's not a point guard that gets other people involved. He's a guy that scores. I think they just don't have enough to win."

"They're a great offensive team, but in the NBA, in the West particularly, you've got to stop people," Boeheim said. "There are great teams out there. It's hard to outscore those teams. They have not been a great defensive team. They just have never seemed to be able to play consistently at a high level. Not necessarily defensively, just overall. I don't know enough about them to know all the reasons for that."

So Jim, now tell us what you really think. 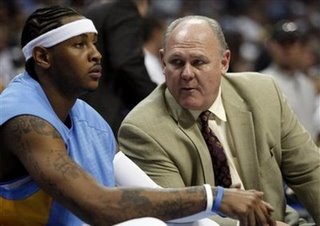 I assume that Carmelo's gonna stay mum on all of this and perhaps that was the point. It's not that Jimmy said anything truly horrible about them (I don't think I'd categorize this as "ripping the Nuggets"), in fact you could pretty much argue that everything he said is correct and obvious. But I guess the point is that Jim shouldn't expect a Denver Nuggets desk calendar in the mail this year...

Anyone else have a topic they'd like Jim to discuss? His thoughts on Cricket? Who he thinks will win Project Runway this season? What he would do if he were the Secretary of Defense? Now seems to be the time.