If You Are A Good Wide Receiver, Contact Syracuse University Now 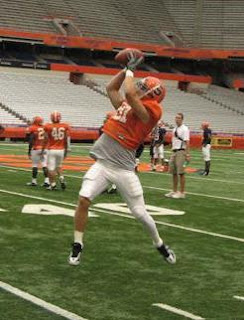 There's already plenty of shuffling and position battling going on in training camp. Especially at the wide open wide receiver position and the defensive backfield. Some big switcharoos over the weekend may have cleared that picture up slightly...or just muddled it even further.

First up, your Syracuse Wide Receiver Bad New Of The Week, brought to you by Allstate. Are you in good hands?

Just when it seemed impossible for Syracuse’s wide receiver corps to get any thinner, an injury has struck. This time, sophomore Dan Sheeran has broken his fibula and will miss 8-10 weeks.

Sheeran, who had four catches for 24 yards in limited playing time last year, sustained the injury during Saturday morning’s practice.

"Dan was in a seven-on-seven drill, he made a cut, caught the ball and and kind of got his foot caught up and torqued his leg," SU head coach Greg Robinson said.

So who wants in on the cursed position? How bout former wide receiver turned safety Bruce Williams? Well even if you don't want to Bruce, tough noogies.

"It hurt my heart. I ain't going to lie. It hurt," Williams said of the request to go back to offense. "The last two years, I've been at safety so I'm like, I've done grown with that defense so much, that it kind of hurt. I'm not even going to lie. But then I thought, if I've got to play receiver, I'm going to do it. It's like second nature to me still."

Williams is possibly giving up a starting position at free safety in order to compete for the wide receiver job and although Robinson said the move "wasn't something that I told him he had to do," it was fairly obvious that it was the team needed right now. It also doesn't hurt as the safety position is fairly loaded as well and can leverage the loss of Williams.

Sophomore Max Suter and senior Paul Chiara have been challenging Williams for the starting job at free safety. Robinson said senior strong safety A.J. Brown has played free safety in the past and is another option. The Orange also has true freshman Dorian Graham playing free safety.

The Axeman thinks this is a blessing in disguise for Williams, as he was never a fan of moving Williams to the defensive side to begin with since he was such a productive receiver in high school. Axe sees a multitude of reasons this could work, one of which is taking advantage of the relationship Williams already has with apparant #1 receiver Lavar Lobdell:

The band is back together. Williams will once again line up with his former CBA teammate Lavar Lobdell. This has to take some pressure off Lobdell, who is expected to emerge as the # 1 receiver on this team with the departures of Taj Smith and Mike Williams. It also puts Williams in position to mentor Marcus Sales, another CBA product and a player many think can get on the field this season.

Tune in next week to find out which Syracuse Wide Receiver goes down next. In other camp news... (Photo Credit: SUAthletics.com)