I Guess All That Offseason "Lifting" Paid Off

Share All sharing options for: I Guess All That Offseason "Lifting" Paid Off 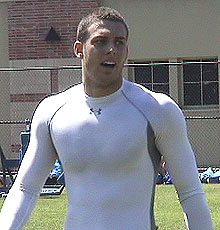 Last we heard from SU freshman DL Mikhail Marinovich, well...we didn't actually hear anything from him...we just saw him whiz by us as he was evading cops after breaking into the Manley sports equipment room. Greg Robinson told us that Marinovich would be disciplined internally for the matter and apparently that discipline will include Marinovich getting some serious playing time this season:

"Mikhail Marinovich is going to play for us," [Co-Defensive Coordinator Derrick] Jackson said. "I know this, I said with Jameel McClain a year ago, you can't just have that guy out there 85, 90 snaps a game. At some point, we have to have twos (second team) that are able to go out and play and function within our defense without us taking a step back. Mikhail Marinovich has shown an ability to learn, an ability to play within the scheme and he's shown he brings athleticism to the table, which helps make us a better defense.

"Now, we've just got to find, what is that role going to be? Is it going to be 40 snaps? Twenty snaps? Ten snaps? I can't tell you right now, but I know he is going to have a role for us and I think it's going to be fairly significant."

Marinovich is pretty much exactly where he wanted to be when we heard back in February that he was a little underweight. He wanted to be in the 225 up to 240 range and he's currently bulked up to 235, 17 pounds heavier than when he got to SU. Not including the stolen goods in his back pocket.

The whole Manley weight room caper seems rather silly now, and if Mikhail can keep his nose clean and play as well as his coaches think he can, it'll be a footnote in his personal history very soon.