Are we really one week away from the first game of the season? Time flies when you're having...fun? The Northwestern blog Lake The Posts and I traded Q&As this week. He's posted my thoughts on SU football and the impending match-up over on his site and I'm about to post his answers to my questions right...about....NOW! 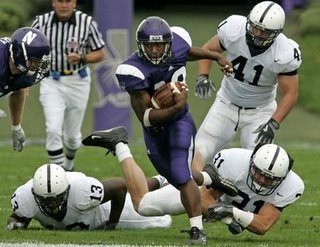 TNIAAM: Give us a quick recap of Northwestern's 2007 season?
LTP: In a word...Meh! I had hoped for 7-5, but the season was so unsatisfying that 6-6 and no bowl game was symbolic ending. Our franchise RB, Tyrell Sutton was injured for most of 7 games, our QB CJ was brilliant in wins (15-4 TD:INT ) and head-shaking in losses (4:!5 TD:INT). It was clear Fitz was not on the same page with the coordinators he had inherited. I've said 100 times, last year was really Fitz' 1st true season as the 7-week preparation in the wake of Randy Walker's death has me put the 2006 season on the "anomaly" shelf.

TNIAAM: What's the biggest difference between last year and this year for the Wildcats?

LTP: Wow. Where to start. The biggest difference is there is hope for defense as we nabbed DC extraordinaire Mike Hankwitz, most recently of WI. He was fired by Bielema after the Badgers dropped from #2 in nation to #37. If he gets us to #37, he'd get a 10-year extension. On offense, we replaced Arkansas-bound OC Garrick McGee, with Bowling Green's Mick McCall. Fitz wisely surrounded himself with very proven, very veteran coordinators and the team and program are now completely "his". The energy is infectious and now it is time to see it result in a bowl win.

TNIAAM: Which players are going to put the fear of God into Syracuse fans the most?

LTP: The offensive skill positions - across the board. Expectations are high for CJ to make major improvements at QB (and this coming off of a single-season passing record). Tyrell Sutton, if he can FINALLY stay healthy will be a 1500 rusher and we are absolutely loaded with veteran WR in our potent, no-huddle spread (Andrew Brewer - beware - gamebreaker, Eric Peterman - the proven quick whitey SR., Rasheed Ward, steady eddy and Ross "TD" Lane are just a few of the weapons you should be scared of). Our OL is as green as the Chicago River on St. Paddy's Day and the giant question mark of the season. 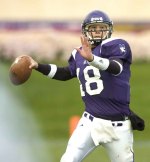 TNIAAM: C.J. Bacher, where does he rank on the all-time Northwestern QB list?

LTP: Not on it. Yet. He'll need to cut his TDs in half and get a bowl win to be considered. Yes, he racked up a ton of yards last year, and had some impressive moments at the end of his sophomore year, but he isn't in the team photo of Steve Schnur, Brett Basanez, or even Zak Kustok yet.

LTP: Most of us actually hope Joe Paterno as if he can weather these early years and get us to the next level, he's a lifer. Until last year Fitz was the only 2-time defensive player of the year. Ever. He's a cult-hero in NU circles and EVERYONE is rooting for him to succeed in Chicago - even the pro sports' team fans. He's so...Chicago...it is hard to root against him.

TNIAAM: It's the first game of the season, Syracuse stinks but is still a big name. Hopes are high for the Wildcats. What kind of atmosphere are you expecting for the game?

LTP: Terrible. Unfortunately. 11 am CT start, 8,000 students who don't begin school until 3rd week of September (NU is on trimester system) and Syracuse doesn't travel. We are a private school in a city with so much going on (not to mention Cubs and Sox pennant chase), we rely on major blips to sustain any crowds. If we start 5-0, 6-0 they will come. Attendance is the #1 priority for new AD Jim Phillips. We've got a great stadium when it is packed (approx 47,000 - 11th in Big Ten capacity), but no way we crack 30,000. The band doesn't even dress for the first two home games. It is the primary reason I started the blog. I just don't get it.

TNIAAM: Gun to your head, how many games is Northwestern winning this year? And if they qualify, which bowl are they going to?

TNIAAM: Better mascot, Willie the Wildcat or Otto the Orange?

LTP: No question. The Dome Ranger. What happened to him - did he get cast as "Franks & Beans" in There's Something About Mary? (Ed. - I think he sells insurance and/or became a radio host. Sadly, bad knees forced his "retirement.") As a childhood diehard PC hoops fan, I grew to despise the Orange, but how can you not love the most featured mascot of all time in SportsCenter spots?

TNIAAM: For SU fans who might not understand the name of your blog, can you explain exactly what laking the posts is?

LTP: Prior to the Gary Barnett era (1992-1998), every win was an event. I call it the Dark Ages (1973-1994) when we did not have ONE winning season and as you know set the all time losing streak with 34 in the early 80s. After wins...students would tear down the goal posts and march them less than the mile from the stadium to Lake Michigan and toss the posts in the lake. The campus is beautiful - right on Lake Michigan - and so "laking" is actually a verb as fraternity pledges often find themselves tossed in as well. Once Barnett came the first thing he did was reinforce the FG posts so they could not be torn down (in addition to a slew of other motivational tactics like "Expect Victory" signs in the endzone and the barring of marshmallows - it was a tradition to bring marshmallows to throw at each other and the band to pass the time during the blowout losses). So, it is a wink to the true fans who were there prior to 1995 and can truly enjoy the transformation.

Keep an eye on Lake The Posts next week for all the Northwestern news you could possibly want. Good luck, 'Cats.