Everyone, Check Your Meal Cards ASAP For Cheesesteak Purchases

Share All sharing options for: Everyone, Check Your Meal Cards ASAP For Cheesesteak Purchases 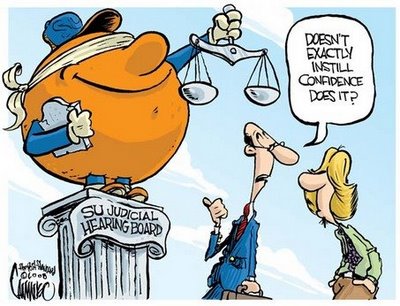 Scoop, Scoop, Scoop...what are we gonna do with you? Obviously the SU Judicial process leaves something to be desired in the "inalienable Constitutional rights" department, but let's face it, if you find yourself at the mercy of this kangaroo court, you still have to at least go through the motions and humor them. At least until you sue them later on.

But still, you should probably at least show up for your sexual assault hearing...

Antonio "Scoop" Jardine did not appear during the nearly six-hour proceeding held on campus. The hearing was closed to the media and the public. Jardine's absence was confirmed Tuesday by three sources close to the proceedings.

Jardine's lawyer, Emil Rossi, was present at the hearing. He did not return calls for comment Monday. On Tuesday, he refused to comment at all about the hearing.

Robert Washington, so help me God if you're in Syracuse right now... And so help me God...der, if you're eating an illegally-procured cheesesteak. Scoop's ill-received cousin from Philadelphia might not have been involved, but it seems as though Scoop may have had a little trouble along the way from his hometown:

One university source said that Jardine and his father had car trouble and could not make it to Syracuse from Philadelphia.

Guys, this was hardly the time to go sight-seeing in Binghamton.

Seriously though, not good enough Scoop. Especially considering his accuser also lives out-of-state and she made it to the hearing no problem. Not good. And the board didn't seem to feel inclined for any leniency:

University officials attempted to contact Jardine on Monday but couldn't, according to one source. The hearing board determined there was no good reason to postpone the proceeding because of Jardine's absence, and that he would not be granted a separate hearing, the source said.

We should know in the next couple days what the punishment is (or maybe we won't) but if Scoop ends up with a stiffer penalty than his teammates, we won't really have to wonder why.