Don McPherson Will Not Be Pleased, Tebucky

Share All sharing options for: Don McPherson Will Not Be Pleased, Tebucky 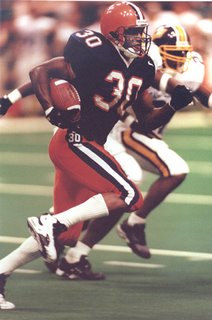 Former NFL player Tebucky Jones was arrested at Mohegan Sun Casino in Uncasville early Friday morning after an altercation in the casino's hotel lobby, according to The Hartford Courant.

Jones, 33, reportedly made inappropriate contact with an unidentified woman at 1 a.m. and later got into a physical altercation with the woman's boyfriend, according to the police report.

Police said Jones knocked over the woman and then punched her boyfriend, Nikolaos Papathanasiou, 24, in the face. A third man, Mark Chichester, 36, then punched Jones, according to the report.

Somebody get Don McPherson on the horn with Tebuck stat. In fact, considering this weekend's revelations, I think we might want to just have every guy at SU take some gender equality credits, just in case. One more of these and I'm considering making SU an all-male college and creating a sister school down the road. The Syracuse Lady Finishing School has a nice ring to it.

No word yet from Tebucky Jones: The Band, but expect the Free Tebucky concert to start up by mid-week.