Share All sharing options for: Chinese Food For Thought 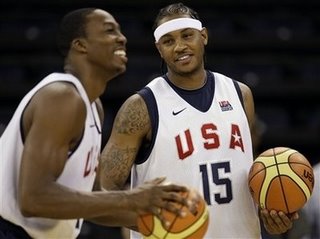 I imagine Carmelo Anthony is not the life of a party. I imagine that he's more likely to flash his million-dollar smile, shake some hands, hug some ladies and then find a cozy spot in the booth and chill there all night, making smalltalk with whoever approaches but not going out of his way to chat with people. There's absolutely nothing wrong with that, it's just the sense I get of him as a person. He's not the guy who writes funny roast jokes for your friends but he's laughing the loudest. He's probably a fun guy to be around but not the guy who gets up and does a good speech at your wedding, you know?

That's why he probably shouldn't be writing columns in the New York Times. Then again, what do I know? He's in China playing basketball and I'm sitting here blogging...maybe Buzz was right... Carmelo doesn't say much you couldn't glean from his Wikipedia page, but does offer a little insight into his relationship with Jimmy B, which is stronger than ever:

Since being named to the USA Basketball team, it’s been good having Coach Boeheim back on the same squad with me. It feels good having him back on the sideline and hearing him. Just being around him is good. I think our relationship has expanded a lot because we were together only five or six months when I was at Syracuse. We formed a strong relationship then, but the more time we spend together, the better it gets.

Get a room, you two. Then of course there's this funny-until-it-turns-strangely-morbid paragraph:

He’s excited about the Melo Center, the new practice facility I gave $3 million to help build. I’m excited too. That was something that’s rare and different. A building on a major campus with your name on it is special. That building will be there when I’m dead and gone.

Speaking of James, he checked in from China again. He regales us with tales of how nice the Chinese are. They're so nice, they'll gladly sit in traffic for hours just to let the USA Basketball Team drive unencumbered through town:

When we drove to our hotel from the airport after arriving here from Beijing, the Shanghai officials blocked off the side streets so we could have a clear route on the highway and in the city. It was a good 30- to-40-minute ride, and we had the road all to ourselves. And this is in a town with 15 to 20 million people living in it.

I mean, there was no traffic. None. They held off all the cars and trucks and buses for as far as the eye could see until we passed by. All that traffic must have been sitting there, at each street along the way, for 10 minutes or who knows how long. But they sat there . . . for us. 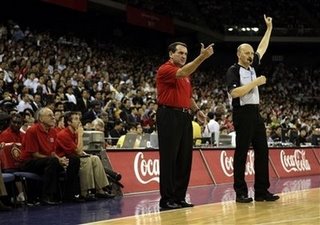 What Jim is neglecting to mention is that if the commuters didn't sit and wait, they'd be shot on sight.

Oh, and I just absolutely loved this paragraph:

We're staying at the Ritz-Carlton - which, by the way, is another pretty nice hotel - and they have a "food room" for us there. They put out five or six different things to eat, which is impressive enough. But there are, probably, 15 people working in that room. Fifteen people to serve 20 of us. Again, it's mind-boggling.

Jim Boeheim is officially your cousin from the Midwest who never left his hometown and is visiting New York City for the first time. I can't wait until he finally tries some local cuisine and says, "I had some authentic Chinese food and, I have to be honest, I don't see what the big deal is. Panda Express is better."